As I promised earlier, here’s my experience with the Pioneer Woman’s Sour Cream Noodle Bake, but with a guest chef!

Let me provide a bit of background.  I have been fighting a chest cold for the last week or so; I’d been nursing colds all summer, a result, I’m convinced, of my new immuno-suppression.  A little over a year ago, I underwent a kidney transplant with Kurt as my donor (amazing as we are not even in the same ethnic group– he is of German descent while I am 100% Filipina), and I’m certain now that the never-ending course of colds is due to the drugs I take daily to prevent organ rejection.  Until this summer, I had never been plagued with these cheesy colds!  So I was just too tired and worn out from a day of prolonged coughing fits to put together the noodle bake.   Yet we needed to eat dinner.

Enter Ken, stage right.  My beautiful, though at times exasperating 12 year old son.  I knew the recipe was a piece of cake— the kind I would use during the beginning of the week when Ken is in full activity mode.  Throw a bunch of stuff in a casserole and heat.  Yup, that easy, which is why I was going to make it on Friday horse theory day.  This evening Ken said he would make it and I could just rest nearby in the adjoining family room.  I asked him if I could photograph him for the blog since I was planning to do the recipe myself, and he thought that would be fun.

First, he got out all the ingredients and I told him to read through the recipe to know what he generally had to do and to find out what needed to be prepared (never too early to practice mise en place).  He preheated the oven and I gave him a pretty red casserole that would fit the ingredients.  Here’s what he had; he even weighed the noodles!

Pulling out the ingredients

I reminded him he needed to grate the cheese:

Then he prepped the onions; he remembered seeing me strip off the outer peels.  I advised him to chop off the roots and the ends.  He initially chopped a single onion, then I showed him how he could take more than one onion, cut it in half to make it more manageable and then chop the bunch.  “OK, Mom, you don’t have to help me; I’ve got it now.” 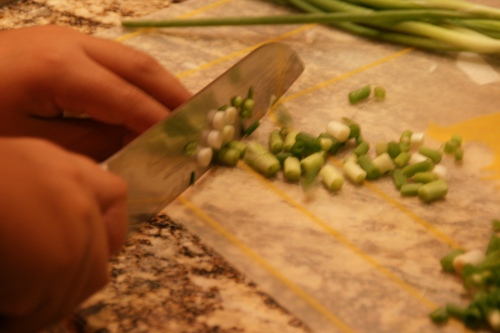 Ken chopping onions– he has chubby hands just like me!

Then he put a pot on to boil for the noodles and started to brown the meat; when I once tried to stir the meat, he told me “You’re not the cook for this recipe, I am; you’re just the photographer for A Cougar in the Kitchen.”  E.g., butt out, Mom, I’m in charge here.  As my friends and family often say, the apple doesn’t fall far from the tree!

He added the sauce and seasonings and let it simmer.

In the meantime, he salted the water (if he’s learned anything from me and Kurt, it’s that the water must be salty “like the ocean”)  and boiled the noodles.

He measured and mixed the sour cream and cottage cheese, added some pepper, 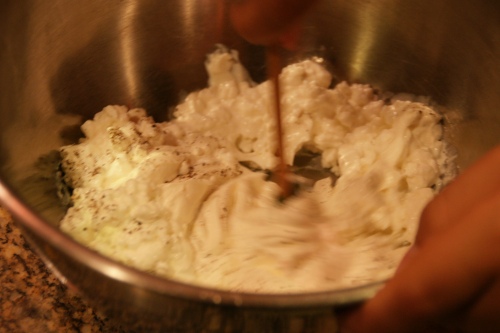 Mixing up the cheese and sour cream.

and finally the green onions.

and the final ingredient!

He layered the casserole,

and baked it for 20 minutes.

He even made a fruit salad! 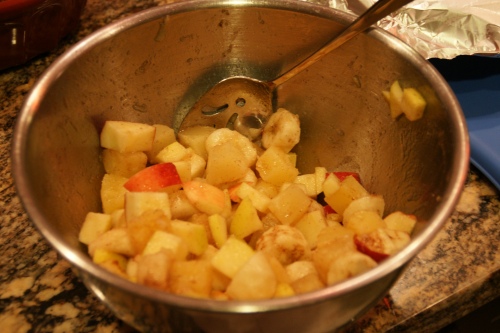 Not bad for a tweenie!