I posted the title above on my Facebook account because this afternoon I made these to-die-for S’mores Bars.  I wasn’t planning to blog about them, because it’s a ridiculously easy dessert, but they are so good, that I’ll include the recipe here as well as a photo.  Follow the recipe just like the lady says, including the shingle-making for the top layer.  When Ken came home, he was my official taste-tester.  It was hard to stop at one bar, even though I had a full dinner of Cincinnati chili (with all the traditional toppings) and cornbread on tonight’s menu.

I found the recipe online here.  I pretty much follow the recipe; it’s a standard ragu technique, but in my experience, missing a few flavor-enhancing techniques.  My only change is to add more of all the spices, and omit the cayenne because of Kurt who no longer tolerates such heat. 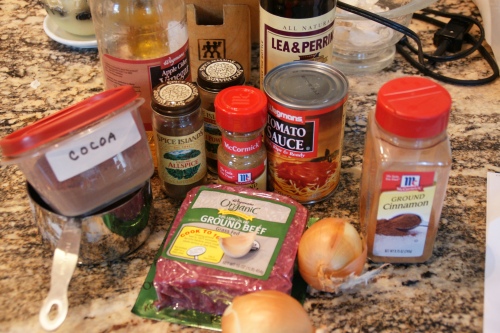 I took the tip off the website from a reviewer to additionally process the ground beef so it is finer and more “traditional.”  Since I was using a food processor, I chopped the onions first:

Then the ground beef; I pulsed about 8 times til it pulled into a ball:

Heat some oil, toss in the onion, meat, chili powder and minced garlic.  Break up the meat and mix everything together.

Gently break up the meat.

You’re not trying to brown the meat, just get it partially cooked before you simmer it with the remaining seasonings and tomato sauce.  I find this odd because BROWN=FLAVOR, and if you’ve ever made your own ragu (bolognese!), you seriously brown the hell out of the meat and veg.  So, I guess it’s a Cincinnati thing, or maybe a Greek vs. Italian thing since the Cincinnati chili has its roots in Greek cooking.  I do add a bit of salt and pepper, though it’s not called for in the recipe.  I’m entrenched in the “season along the way” approach to cooking; for my family, it’s the difference between seasoned food and just plain salty food! 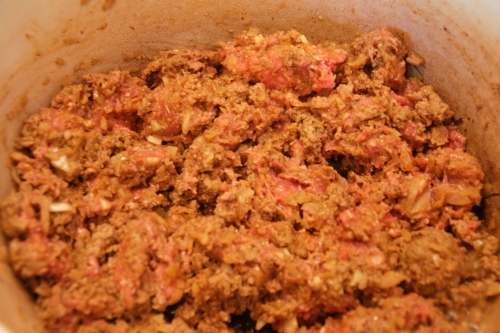 Bring to a simmer and simmer uncovered for 1.5 hours.

While the chili simmered, I prepared the toppings of grated cheese, chopped onion and a can of rinsed and drained kidney beans.  Plus a bowl of oyster crackers for Ken.  In the last 30 to 40 minutes of simmering, I boiled the spaghetti and made a round of cornbread (the sweet kind that my guys like).  I make mine from scratch, but honestly, you can just use a box of Jiffy.

Toppings and boiled spaghetti.  I kept the spaghetti loose by pouring a few small ladles of pasta water over the noodles then cover the bowl with plastic wrap then stashing it in the microwave while I finished with the cornbread.  You can add a little oil, but then the chili will not adhere to the noodles– your choice!

Cornbread, spaghetti, chili and toppings– including oyster crackers for Ken!

Five-way Cincinnati chili.  Yum on a cool fall day.  I could have had more, but I had to save room for a S’more Bar!