Just for Amy…plus a nod to Minnie!

Today I decided to make a canned-soup-and-mayo recipe just for Amy, since she asked.  I’ve known Amy since I was nine– which means for 40 years.  She was my first friend when I moved from a private co-ed French school to a private all-girls Catholic school run by an order of sisters.  She claims she is a hopeless cook, but I don’t believe her.  Like me, she is a Capricorn, which means we’re good at anything we set out to master.  I think she probably doesn’t care about cooking the way I do– she’s a witness to the fact I was reading cookbooks when I was nine– and just lacks the knowledge.  Her passion is her garden;  I like gardens and flowers, too, but the idea of spending all that work on tending to them to not get fabulous is overwhelming to me.  So I am a hopeless gardener.  Maybe next spring, we’ll give each other mini-tutorials on what we each know best to do.  (I would just like to have a plant live longer than a week once I’ve planted it into the ground…)

The casserole recipe is Kurt’s; he received it from his mom and it’s one of his favorites, in spite of the canned soup.  He claims that he and his friend Mike would eat the entire casserole between them when they were house mates.  When I told him I was making it tonight; his response was “Tonight?  You know I’m going out with Nate tonight!”  Jeez, he can have it for a midnight snack instead of his usual turkey and cheese sandwich…

I’m also going to bake a cake– it’s the absolute best chocolate cake with chocolate frosting I’ve had, and I’ve been searching for a long time, but no longer.  It’s a recipe from another good friend, Minnie, an awesome, adventurous cook.  I’ve known her for about half as long as I’ve known Amy; we were initially pulled together as part of a hospital-wide team to implement a new information system (18 months of mostly-controlled chaos).  Minnie had the patient financial side as Director of Admitting (gotta find the patient in the system); I was on the clinical side from Nursing  (gotta put in lab and diet orders), but mostly for my lack of fear around computers– I have NO formal clinical training.  Although she now lives in her home state of West Virginia, we keep in touch via Facebook.  I’m envious of her access to good local food, and she wants back into the big city.  So we trade recipes; this is one of three she’s sent to me (the other two are on how to prepare and cut ears of fresh corn into creamed corn to put away for the winter and a fail-proof cobbler using summer’s farm-fresh fruit).

Let’s start with the cake, because who doesn’t like dessert?  The recipe uses a traditional creamed butter and sugar base into which you ultimately alternate flour and milk (here, buttermilk which results in a very moist cake).  Last time I made this cake, I used cocoa powder, so this time I will use unsweetened baking chocolate.  Make sure all your ingredients are at room temperature before you begin, so the cake layers will bake evenly.

Preheat the oven to 350 degrees.  Grease and flour 3 round cake pans.  I used 8 inch pans because I like a TALL cake!

Mix chocolate with boiling water. I just poured the boiling water over the chocolate squares, let it sit a few minutes then mixed to combine.  Set aside to cool.

Sift flour and baking soda.  Use a 2 cup measuring cup to measure the buttermilk.  Set aside.

Cream sugar and butter until light and fluffy.  I used a hand mixer and started on low, and slowly worked my way up to my third (and highest) speed.  It’s a 20 year old mixer and that’s three cups of sugar to cream!

Creaming a LOT of butter and sugar

Add eggs to the sugar/butter mixture, one at a time, mixing after each egg is added. I scraped down the bowl after the fourth egg and beat briefly to combine.

Add eggs one at a time.

Sugar, butter and eggs all in! 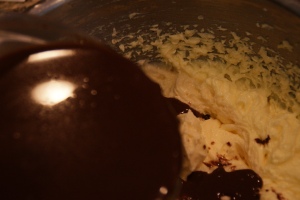 Mixing in the chocolate

Alternate the flour and buttermilk.

Stir in vanilla.  Or use the mixer because it’s a lot of batter…

Pour into 3 round cake pans and smooth out the tops with an icing spatula or butter knife.  Ken, upon his arrival home, and despite my explanation that I made the cake too early to let the batter bowl sit out, proclaimed, “You didn’t leave me the bowl; I’m officially MAD at you.”  (Yeah, Minnie, he loves the raw batter)! 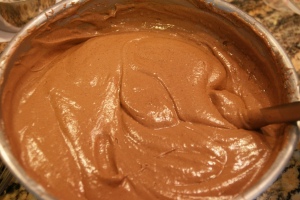 Bake for 35 – 45 minutes.  Minnie didn’t describe any indicators about doneness, but she knows I’m an experienced baker.  First, there’s the cake tester; it should come out clean.  Secondly, the layers should just be starting to shrink from the sides of the pan.  Lastly, if you press gently on the cake’s surface, it should spring back.  Since I used 8 inch pans and had thicker layers, it took 43 minutes in my oven. 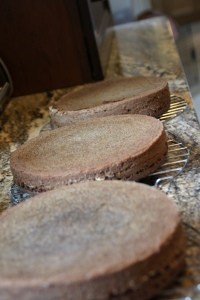 Make the frosting shortly before assembling the cake.  The frosting reminds me of ganache, except you’re only heating the chocolate.  The critical success factor is DO NOT OVER-BEAT!  In fact, I used a rubber spatula to mix the chocolate and sour cream and only used my mixer at the end to give the frosting a little volume.

Melt chocolate in a double boiler or microwave.  I used the microwave because I’m paranoid steam from the boiler part will condense into the chocolate and make it seize.  I let the chocolate cool til barely warm, then added the sour cream, mixed until combined, then finished with a hand mixer on low.  If you don’t use the frosting right away, cover it with plastic wrap– it will harden slightly when exposed to air. 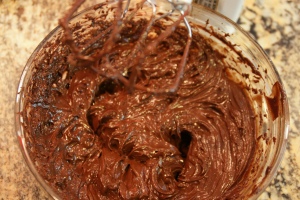 Assemble the layers on a serving platter like this:

Use very little frosting between each layers; you don’t need much as this is already a very chocolatey cake! 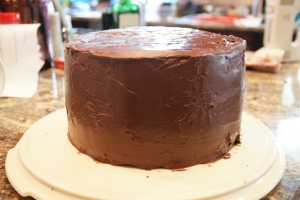 Note the canned soup and mayo 🙂

Preheat oven to 375 degrees. Spray a medium casserole with cooking spray and set aside.

Slice chicken breasts into 1/4 inch slices on the bias. Kurt cuts the breasts in cubes, but I think it’s too chunky.  When you cut on the bias, you are cutting along the short side of the breast, but at a diagonal to the cutting board, not perpendicular.  Season with salt and pepper, set aside.

In a medium bowl, combine soup, mayonnaise, lemon juice and curry powder. Taste and adjust seasonings.  Ken decided to get in on the act, so he put together the sauce part of the recipe.

We used red curry powder (it’s hotter!) because we didn’t have the generic yellow stuff.

Add sliced chicken and cheese, then mix gently to combine.

“I’m gently folding, Mom– see you didn’t even have to tell me!”

Pour chicken mixture over the broccoli in the casserole. Bake in preheated oven for 40 to 45 minutes til bubbling and slightly browned.  Serve over steamed rice.

Now to find out the latest with Ken and “the girl.”  The chocolate cake is a brilliant inducement, no?  Days of Our (Middle School) Lives…

One response to “Just for Amy…plus a nod to Minnie!”