As I mentioned in one of my recent posts, I knew Kurt was craving RED MEAT.  “I can only do poultry for so many days in a row” is the underlying message to “Is that the last of the turkey dishes?”  He, like my sister’s husband Jeff and good friend Andy, are carnivores. Did you see the Washington Post article about the dependence of man’s brain development on his ability to eat meat and cooked food?  (Too bad vegans, vegetarians and raw food people, you would NOT have been the fittest to survive).  Peering into the recesses of my freezer last night, I found a single 1 lb pack of ground lamb– PERFECT!  I was going to make Middle Eastern fare tonight– lamb meatballs, pita bread, yogurt sauce and hummus.  At least that was the plan.

Of course, I forgot that I had signed up to participate in a usability study in downtown DC, close to my childhood home, right in the middle of my day– after rush hour and through lunch.  Heavy sigh.  As Kurt was drinking his morning cup, I mentioned I was making lamb meatballs, and that I may have to use store-bought pita bread.

“Store-bought?” he said, giving me the stink eye.  “You can’t make your own pita?”

I just rolled my own eyes.

“Well, are you making tzatziki sauce?”

“I was thinking about just buying some Greek yogurt, but I guess I’ll see if there are English cucumbers at the store.”

By this point in the conversation, I was already calculating how long it would take to make the pita bread– two hours for the first rise, but only 15 to 20 minutes for the second.  I could probably do the pita if A) I finished the usability study on time and B) we ate a little later.

Oh, the things I do for love–but he did give me his kidney, which is nothing short of the gift of life.

I can’t talk about the product I was testing, but I was familiar with similar products and decided to wing it for whatever tasks the tester gave me, ignoring the provided written resources (reference guide and user manual).  I opted for the help line (they actually had someone set up to be the customer service person) instead of reading the documentation.  It was fun to now be on the other side, one of those people we called the “RTFM” idiots (as in Read The F*$&#^@ Manual).  Whatever.  I needed to get through the test as quickly as possible (I’m sure some of my usability friends are bugging out as they read this)– and I DID!  To be honest, I never read the full user manual for any gadget; the most I will do is read through the quick start guide.

So I was back home in record time.  I threw together the pita dough, set it in the pantry to rise and went to the store for the rest of my ingredients, including the blasted English Cucumber.  I went to the Asian market because they have a huge selection of herbs and I wouldn’t have to roam from store to store to get what I needed.   I found the cucumber and by accident, a new kind of yogurt product– “strained” yogurt which I thought would be super thick like Greek yogurt and work wonderfully for the tzatziki.

My recipes are all adapted from a Williams-Sonoma cookbook entitled “familymeals” by M. Sinskey (as in the wine people).

Note: I make my hummus from dried beans that I cook myself to avoid all that extra salt; I’m also now getting the heebie jeebies from the BPA used in the linings of cans.  If you want to make your own, you need to start a day ahead to soak the dried beans overnight.  Here’s how I do it:

Soak one cup of dried chick peas in a bowl with lots of water to cover by a few inches.

Soak overnight in lots of water

The next day drain the beans, toss them into a large heavy-bottom pot and add enough fresh water to cover beans by a few inches.  Add 4 crushed garlic cloves.

Use a big pot!

Bring the pot to a boil, then reduce heat to a slow simmer.  Simmer for 40 minutes, then add 2 tsp of salt.  Simmer another 30 minutes or until peas are tender.  Test five peas (the 5-bean test); if all are tender, then they’re ready!

Do the 5 bean test (test five peas) since the peas cook at different times. 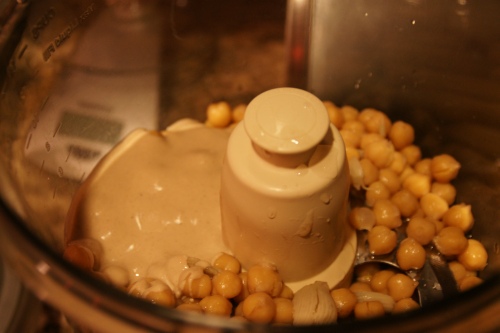 Process peas til smooth, then add salt to taste.  At this point the hummus will be very stiff.  That’s OK.  Place the lid back on the processor and with the blade running, slowly add the olive oil through the top.  Check for consistency; if too thick, add the water/cooking liquid a tablespoon at a time to your preferred consistency (Kurt likes his hummus very loose).

Yes, that’s homemade pita.  I use the ingredient list from the Sinskey book, but I don’t follow her technique.  It’s a basic bread recipe, and I mix the dough the way I describe in a previous blog, here.  (Basically, whisk together the dry ingredients, then add the warm water slowly til the dough comes together.  Knead til elastic and smooth. Place in an oiled bowl, cover with plastic wrap and allow to rise for 2 hours).

Prepare dough as described in my previous post (see above).  After the first rise, place dough on a floured board and shape into a log.  Divide the log into 12 pieces and roll each into a ball.  Place balls on a lightly floured rimmed baking sheet (or board like I did), cover with plastic which has been sprayed with cooking oil and set in a warm, draft-free area to rise for 15 to 20 minutes.  In the meantime preheat the oven with a pizza stone on the lowest possible rack to 500 degrees.  If you don’t have a pizza stone, use an inverted rimmed baking sheet instead. 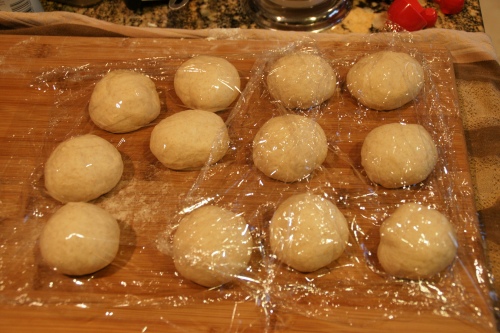 After the dough balls have risen, roll each as thinly as possible.  Make sure your rolling surface and pin are lightly floured..

Pitas ready for the oven…

Working quickly to avoid losing too much oven heat, place the pita circles onto the baking stone/sheet.  There are many ways to do this from flipping them off your palm to slightly flinging them onto the baking surface.

Fit as many as you can, leaving a little room between each bread

It takes between 2 1/2 and 3 minutes for the bread to puff up and brown.  Once the tops of the pitas are brown, open the oven and using tongs, flip each pita over to the other side.  Close the oven and let them bake another 2 to 2 1/2 minutes til the flip side is brown.  Remove the pitas to one side of a large dish towel; fold the other half of the towel over the pitas and gently press with your tongs (NOT your bare hands) to deflate the breads.

Cover me up and smush me…gently!

Continue til all the pitas are done.  You can leave them wrapped in the towel til the meatballs are ready.

The lamb meatball recipe is very adapted from the original in the Sinskey book.  First, I never have 1 1/2 lbs of ground lamb; it’s always sold in 1 lb packs like ground beef.  I have adjusted the seasonings to how we like them.  Instead of broiling kabobs, I shape the meat into small meatballs.  I think they fit better in the pita and take just 5 -7 minutes to broil.  (Obviously if you have an outdoor grill and aren’t afraid of it like I am, you’ve totally got it made with no clean up).

First I turn on the broiler.  Then I chop: 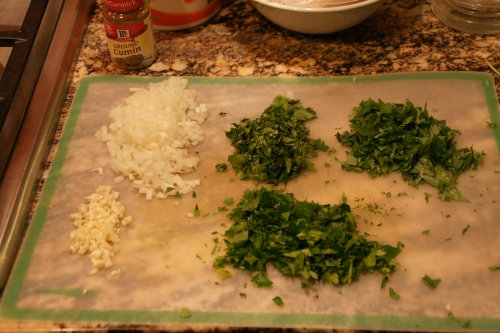 and the chopped stuff, cumin and salt: 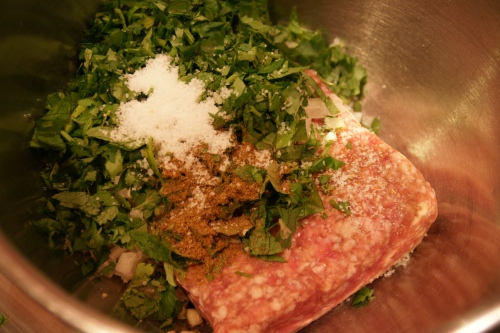 Mix gently but thoroughly and shape into 1-inch meatballs (Kurt did this for me as I was still in pita-making mode).  Place them on a broiler pan. 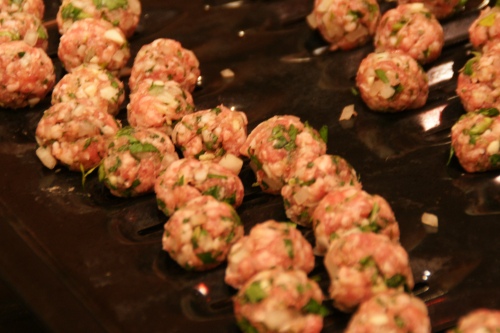 Ready for some fire!

Broil meatballs are browned and cooked through (yep, you can taste one to test), about 5-7 minutes.  Serve with pita bread and tzatziki sauce.

The tzatziki sauce?  Oh, Kurt made that and I have no idea how much stuff he put into it. I told him to use a cup of the strained yogurt, which he said was very thick.  He chopped a little cucumber, added salt, a little cumin, a dash of cayenne and paprika (!) for color (?).  I am NOT asking him as I think he’s in the man-cave playing Skyrim with Ken– which makes me persona non grata.

I don’t know exactly what’s in it, but it was very good!

So good–pita with lamb, pita with hummus, pita just dipped in Kurt’s sauce! 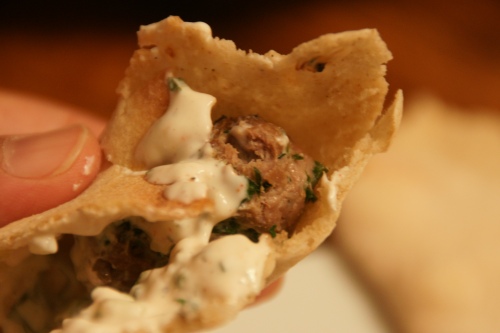 You can’t stop at one…