Italian Sausage Subs with Red Peppers and Onions with a Twist!

Who hasn’t enjoyed an Italian sausage sub with grilled onions and peppers?  My husband Kurt and I made these every year for our summer party along with steamed Maryland crabs and fried chicken.  As much as folks like the subs, it means Kurt is tied to the grill, hovering over the sausages, rather than hanging out with the rest of the party.  He has complained about this on several occasions, but I do NOT play with propane gas grills.  It’s the potential explosion factor– give me an old Weber charcoal kettle and I’m good to go…

This past summer, after a two year hiatus due to my transplant surgery, we resurrected our summer party.  This time we were also fundraising for our young cousin in Pittsburgh, Sara, who was battling leukemia.  (She is in full remission now).  Instead of having Kurt hang out at the grill, I wanted  to serve the sausage and peppers buffet-style.  Fortunately, I had discovered a great recipe online from Giada; you can get it here.  I used pork sausage today, but I have made it with turkey sausage as in the original recipe.  The sausages are initially browned then cooked with peppers, onions and tomatoes; Giada’s twist is the addition of a full cup of Marsala wine.  It was a big hit with the family– especially Kurt.    I knew I could scale the recipe for a crowd and simply serve the sausages out of one of my chauffing dishes, thereby freeing Kurt from grill duty!

The dish is very easy to prepare and takes about an hour to pull together.  I’ve also made it ahead of time and it reheats perfectly; I think it’s even better when the sauce has had time to meld overnight.  Set out the pot with some good Italian sub rolls and you’re set!

Here’s how I made it:

Then I browned the sausage over medium heat: 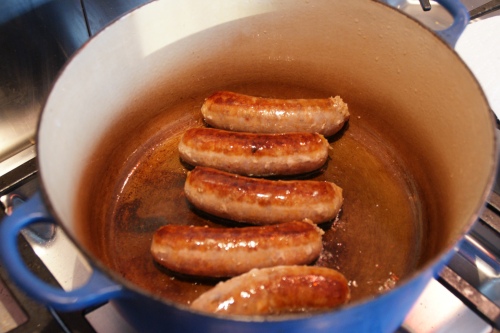 If you have a spatter shield, use it! Takes about 10 minutes to brown on both sides

After removing the sausage to a plate, I added the onions and peppers and seasoned with salt and pepper and sauteed til golden brown: 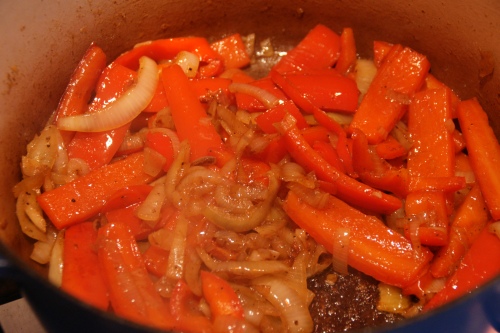 It took me about15 minutes to get golden onions

I added the oregano, chopped garlic and fresh basil and cooked a bit more: 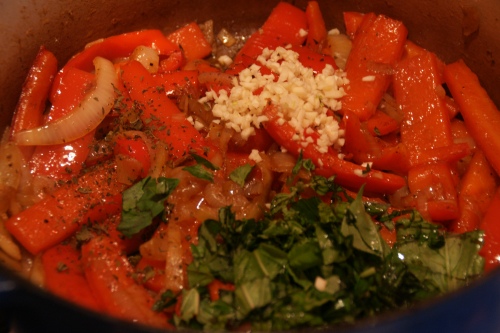 In went the tomato paste which I let brown a bit in the pan,

I let this brown a bit to intensify its flavor

then the Marsala wine, canned tomatoes and chili flakes.  Stir to combine and bring to a simmer. 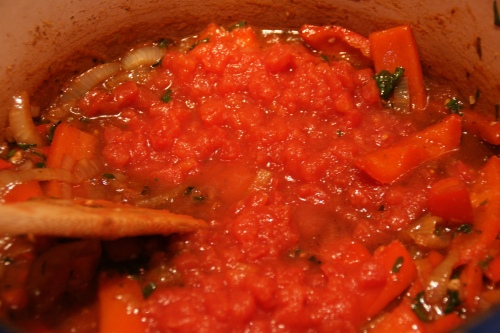 I cut the sausages into pieces (4-6 per link), then nestled them into the simmering tomato sauce:

The sauce is fairly thin, but will thicken as it simmers

Simmer uncovered for about 20 minutes or until sauce has thickened; I could eat just the onions and peppers with some good breat!

Sauce has reduced and thickened!

Make sure you’ve got lots of napkins!