Testing A New Treat for Easter– A Chocolate One, Of Course!

The Great Easter Menu Debate kicks off as soon as Grace books her train ticket for DC.  It was my sister Tina, of course, who initiated the Easter “conversation” via FB.  Just this weekend, my husband Kurt asked if he would have any say in the Easter menu as he knows there are always “requests,” just like at Christmas.  I told him that the ball was now in my court and I wasn’t having any great ideas other than our traditional Filipino lechon, which is a roasted fresh ham.  Oh, the skin on that hunk o’ meat!  People fight over that top piece that is super crisp…

In the meantime, I decided to work on Easter treats.  I usually make Christmas candy, but buy Easter candy.  However, for this Easter, I decided to make a special candy recipe to celebrate the fact that next year at this time, Ken will become a part of the Roman Catholic community as a full adult member.  (He’s already talking about choosing god-parents, so it seems he has committed to the journey).

The recipe is for “S’mores Rocky Road” and it comes from my standby Christmas cookbook, Christmas 101.  I have been eyeing this recipe over the years, but wanted neither to bump my traditional candies, nor attempt adding a new one.  This recipe looked simple enough– bite-sized pieces of graham crackers, chopped walnuts, marshmallows and A LOT OF CHOCOLATE!  As in one and a half pounds.

The only change I made to the recipe was to toast the chopped walnuts; I wanted to use almonds like real Rocky Road (I’m thinking Baskin-Robbins here), but I realized I had used the last of them with my spicy nut recipe. 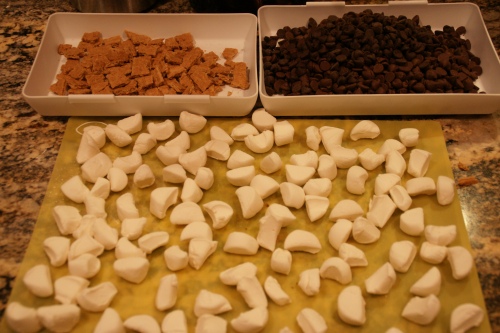 The oiled scissors make cutting up the marshmallows a snap!

Toast the chopped walnuts in a preheated 375 degree oven until light brown.  The nuts are usually done when you can smell them roasting (but keep an eye on them anyway).  Line a rimmed baking sheet with parchment paper.

I really wanted almonds, but these worked out great!

The chocolate thickens slightly as it cools

These marshmallows should not melt

Then add the walnuts and cracker pieces.  Mix well to combine and coat everything with that yummy milk chocolate! 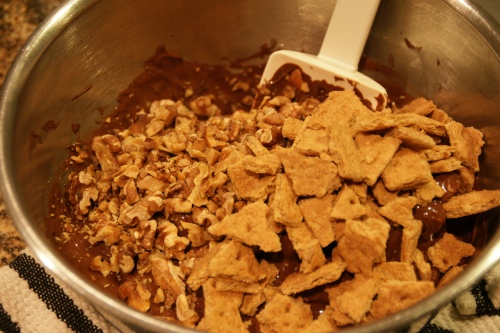 This is almost as easy as making Rice Crispie treats!

Pour the mixture onto a rimmed baking sheet lined with parchment and spread to a 1-inch layer.

Cool in the refrigerator until firm.

Slice into bite-size (your definition of) pieces and serve.  It was delicious– I was cutting and eating at the same time.  The bits of marshmallow pieces were perfect with the toasted walnut and chocolate.  It’s an addictive treat, for sure! 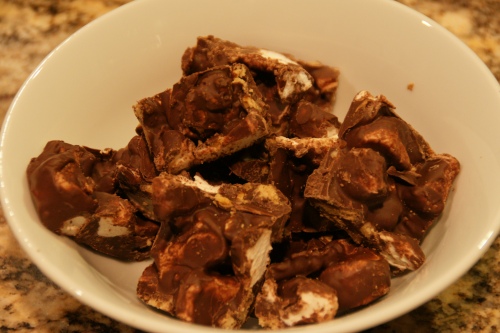 The recipe claims you can store the candy up to two weeks at room temperature in an airtight container, so I’m leaving mine out on the counter in its container to see what happens.  If it holds up, I’ve got a new Easter treat!