My son Ken attends a parochial Catholic high school after eight years in our county public school system.   The biggest adjustment for him was not academics, but his school orchestra program.  Our county prides itself on its nationally recognized strings program, which begins in fourth grade.  As for the Catholic schools, I know only one parochial grade school that maintains a strings program.

Last year with just 8 kids and no violist or bassist, the kids dubbed themselves the “Orchesquad.” They were a very cohesive group and Ken spent most of his time with them.  They even asked the Boosters for “Orchesquad” sweatshirts so they could create more awareness around strings music.

They’re still a small group– just a dozen; one of the cellists agreed to take up the bass and a violinist fiddles around with transcribed viola parts.  Only six of them are going to adjudication, and I’m partial to them.  As one strings mom put it, “They’re like the red-headed stepchildren of the music department.”

The school’s spring music trip is this week– band, orchestra and chorus are taking the Amtrak night train to Orlando.  Kudos to the dozen chaperones and priest who signed up to monitor one hundred teens on a train!

Instead I’m baking train treats for the Orchesquad.

Dulce de leche cookies are sandwich cookies– sweet, slightly crumbly,  butter cookies filled with sticky globs of caramel dulce de leche, and lightly dusted with powdered sugar.  I made them for the first time this Christmas with a recipe I found online.  The woman who shared the recipe is Brazilian; she says these are known as “casadinhos de doce de leite” in Portugese.  “Casadinhos” translates to “married”– such a cute term for this sweet little treat!  I made a double batch and subsequently adjusted the recipe a bit.

With an electric mixer (hand or stand), cream together butter and sugar .  Add vanilla and beat briefly to combine. 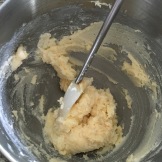 Gradually stir in flour (do not use mixer) until well blended; it’s easiest to use your hands toward the end.  Dough should be firm enough to handle without sticking to your hands. 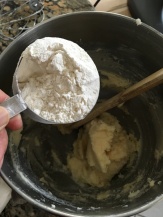 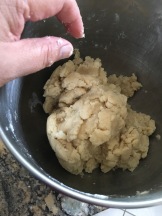 Evenly divide dough into four pieces; I’m compulsive and weigh each piece to make sure every piece is the same.  Place three of the pieces to the side under plastic wrap while you work with the fourth one. 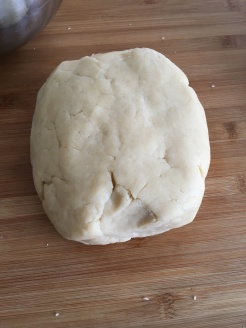 Take the remaining (fourth) piece and divide again.  Each half will be divided into 18 pieces.  I do this by cutting the each half into thirds, then each third into six pieces.   (Don’t worry if they’re not perfectly portioned; that’s just gonna happen if you are hand-shaping vs. rolling and cutting). 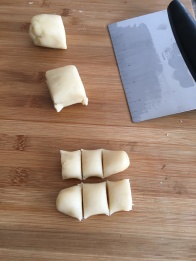 Roll each piece into a ball and place on an ungreased cookie sheet, about one inch apart.  Slight press the center of each ball to flatten.

Bake for 15 to 20 minutes until cookies are slightly golden on the bottom; they will be set, but soft.  Let rest on sheets for 30 minutes before removing from sheets.  Spread about a teaspoon of dulce de leche on half the cookies; top with the remaining half.  Dust lightly with powdered sugar.

I never end up with 100% perfect circles…

One response to “Train Treats for the Orchesquad: Dulce de Leche Cookies”