Healthy Can Be Tasty!

After the fried food extravaganza last night, namely, fried sweet potatoes and hush puppies (served with melted butter for dipping!) that accompanied the seafood, then the at-home grand finale slice of tunnel of fudge cake, I decided we needed to switch to something lighter aka “low fat” for tonight’s meal.

“Low fat” is a bad word in our household– specifically, it’s a bad word for my husband Kurt. I tried once to buy the “lighter” or “reduced fat” versions of mayonnaise, sour cream, and cream cheese and you would have thought I had changed our meals to rations of bread and water. Literally, that jar of mayonnaise sat opened and untouched in our fridge til I finally threw it out; during this trial, Kurt often cast a suspicious eye upon any meal that he knew required one of these fats as an ingredient– “I hope you used the full strength stuff; you know I can tell the difference.” He also claims he can tell when I use boxed chicken stock (even if it’s organic) instead of my own.

So I don’t bother with reduced fat anything. Instead I look for meals that use hardly ANY fat and try them out when we’ve had an overload of rich and heavy. One recipe that took me by surprise was my friend Jacki’s white chicken chili– yep, the one from the camping trip. It was an immediate hit and the only fat is a little bit of olive oil to saute the chopped vegetables.

I found another winning dish while searching for recipes that use Israeli couscous. On a whim, I had picked up a box at Trader Joe’s and figured that since we all liked regular couscous, this could be a new pasta addition. The recipe I selected was by Martha Stewart– you can find it here. Like the white chicken chili, the success of this dish, which has none of the cream components my guys love, is the texture of the big Israeli couscous pearls and the high flavor profile of lemon and saffron.

I mostly followed the cooking process outlined in the recipe, and I always start with my mise en place:

Next I toasted the couscous– this gives them a deep nutty flavor!

Then I added a bit more oil and browned the chicken thighs. See how there are bits stuck to the pan– those sticky bits are fond (another French term that means “base,” and it’s truly the flavor base for this dish).

The “Fond” or Flavor Base

I added the onions and let their juice begin to loosen the fond: 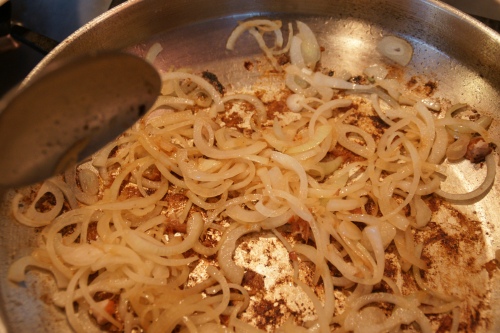 At last the remaining vegetables dropped into the pan– the tomatoes, garlic (I used a press because I don’t have to peel the cloves) and lemon peel (I used way more than the recipe). I held back on the saffron because I think it’s a delicate seasoning and should be added closer to the end of cooking.

The rest of the veg

Note that the bottom of the pan is clean; the juices of the tomatoes have released the fond and I haven’t even added the wine! 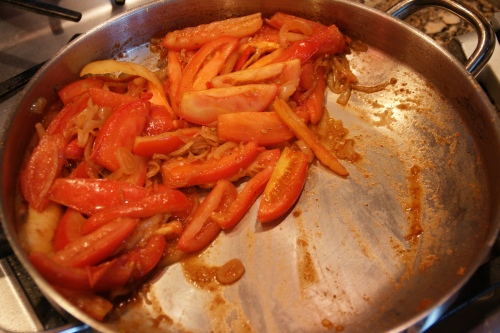 I returned the chicken with its juices to the pan (btw, Grace made me that platter in 1995) then poured in the wine, stirred and let it reduce a bit to kill off the alcohol. At this point I sprinkled in the saffron; use Spanish saffron– it’s terribly expensive, but you only need a pinch and no other saffron matches its fragrance!

And a few saffron threads…

Finally, I tossed in the toasted couscous and added the chicken stock (not my own and I wondered if Kurt would notice). I mixed everything a bit to get the couscous into the liquid, added some salt, brought the liquid to a simmer then clamped a lid on and waited. I probably stirred it two or three times.

Will he realize it’s not homemade stock?

When the couscous was tender and the chicken cooked through, in went the peas to heat through.

This is what it looks like when it’s ready.

I served it in bowls with a slice of lemon. Tasty AND Healthy! 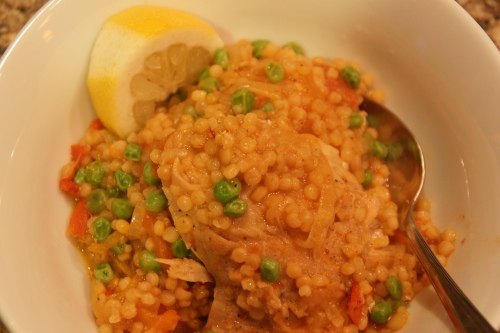 (And I felt no guilt whatsoever when I had a slice of tunnel of fudge cake for dessert).

3 responses to “Healthy Can Be Tasty!”