The problem with commercial chickens is that they are raised REALLY big.  I guess that’s fine if you have a large family, but the 5 pound roaster I bought from the store because I didn’t put in my winter chicken order with my Chicken Man, leaves me with a lot of leftover meat.  Sometimes I make chicken salad for lunches, but last night I decided to make another one pot meal.  Plus, it’s getting cold here in Northern Virginia and time for hot and hearty meals!

My first exposure to the dish was the canned variety when I was very young– I can’t even remember the brand, but my sister will.  The sauce was, well, unctuous and salty.  The chicken was cut up into perfect teeny tiny cubes and the dumplings were rectangular and gooey.  Fortunately for me and Tina, my parents hired a full-time housekeeper and she made us REAL chicken and dumplings.  She cut her dumplings from strips of dough and they were so much better than the canned ones.

Fast forward a couple of decades and I’m now sitting at my sister’s kitchen table; she has spooned out a big bowl of something that smells awesome.  She tells me it’s chicken and dumplings that she learned to make from her husband Jeff who hails from Roanoke, Virginia.  (No, it’s not the lost colony, which is in NC; when Jeff reads this, I bet he’ll be surprised I know this kind of geographical trivia since most of the time I can’t remember how many continents there are).

Jeff’s recipe is easy.  He’s a man, after all.  He uses chicken stock, boneless, skinless chicken breasts, some vegetables and seasonings; all are simmered away til the chicken is cooked and the vegetables are tender.   The cool part is how the dumplings are made; they’re not dough strips.  He makes a dough with Bisquick and drops them on top of the simmering soup.  I was stunned at how good they were– Bisquick!  Fluffy yet substantial and filling, the bottoms savory and slightly chewy from simmering in the broth.  My son Ken thinks they are second only to our neighbor Penny’s matzoh balls.

If you’re a frequent reader, you know by now that I like to improvise on recipes (somewhere in my DNA is the “doesn’t like to color inside the lines” gene).  I use leftover roast chicken and if I have it in the freezer, my own stock.  I tend to add lots of vegetables so we can have a one-pot meal and I thicken the chicken broth with a roux made by sprinkling flour over the sauteed vegetables prior to adding the broth.

Chicken and Dumplings, Inspired by Jeff

Here’s my starting block of stuff…

At the starting line…

…and after I chopped everything up:

Heat a large skillet over medium heat and melt the butter:

Use medium heat to sweat, not brown the vegetables

First add the onions and let them sweat for a few minutes:

Once the onions have begun to soften, add the carrots and celery and cook until celery is softened: 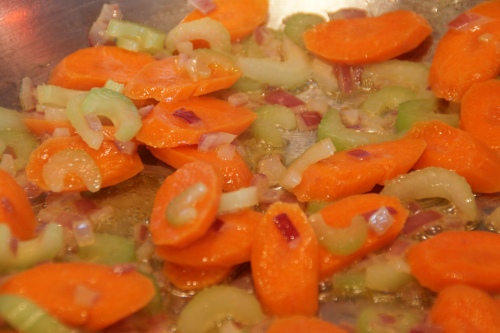 All vegetables softened– notice the translucent celery and onions

Make the roux by sprinkling the flour over the vegetables, and stir:

Add 2 cups of chicken broth and stir til smooth: 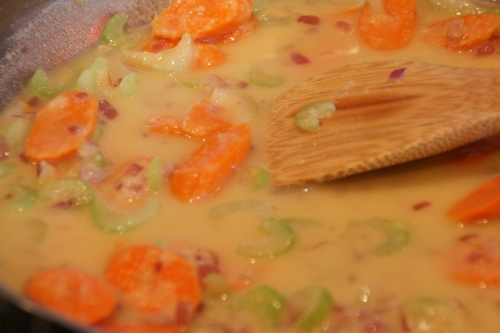 Stirring in about half the broth

Bring the contents to a simmer, then add the chicken:

Add the chicken and stir

Simmer the stew covered for 10 minutes.  During this time, prepare the dumpling dough by mixing the Bisquick mix and milk together with a fork til combined: 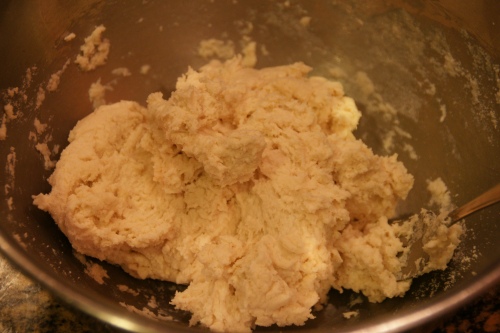 After 10 minutes, taste for seasoning, then add the peas:

Let stew come back to a simmer, remove the bay leaf, then drop dumpling dough by the tablespoon on top of the simmering liquid:

I use a large soup spoon to make the dumplings 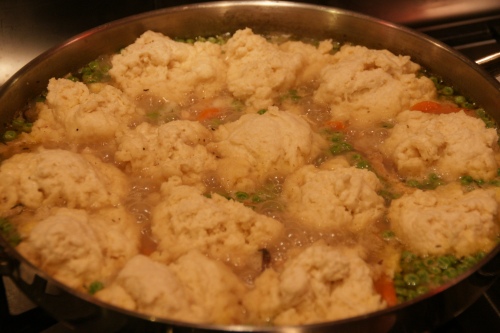 Dumplings have begun to swell after 10 minutes

Cover the pan and simmer another 10 minutes:

After another 10 minutes, the dumplings are done!

Thanks, Jeff, for inspiring such a homey, hearty meal! 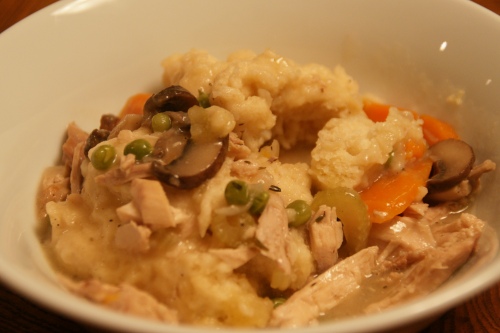 I make my own Bisquick.  It’s cheaper and I can avoid some of the preservatives as well as pat myself on the back for being a little greener by not purchasing all that packaging.  Dump all ingredients into a food processor and pulse til the flour resembles fine meal.  Store in a plastic tub.  Use as you would Bisquick.

4 responses to “Chicken and Dumplings, Jeff-style”