Today my son failed to wake up with his alarm; he says it didn’t go off, but he had a busy schedule yesterday after school with a 2-hour make-up art class and riding lesson.  I offered to drive him to school and on the way back, I stopped off at the Asian market to pick up the masa and corn husks (interestingly, they also have a variety of Latin American foodstuffs), along with my Asian staples, namely, Filipino soy sauce and cane vinegar.

The AB recipe is here, but I changed it somewhat based on the fact I had pre-cooked turkey and slightly different ingredients at home that I wanted to use up.  The main difference is in preparing the turkey meat and preparing the corn husks.  Tamales take a long time to steam, so give yourself plenty of time.  They also reheat and freeze well!

for the turkey and tamale liquid:

“Is this the last of turkey?” said Kurt.

And how to do it:

In the morning, place the dried husks in a large container and cover with water.  Weight down the husks with something heavy to ensure they soak thoroughly.

Soaking under a glass paperweight

Chop the turkey, place it in a large saucepan and add the spices.

You don’t have to chop the turkey now; it falls apart after simmering with the spices.

Add the chicken stock; the turkey should be covered, so add water to cover if you need it.  Bring the pan to boil, then cover and turn heat down to maintain a slow simmer.  Simmer covered for 1 hour.  Let the liquid cool, then remove and shred the turkey.  Reserve the turkey liquid. 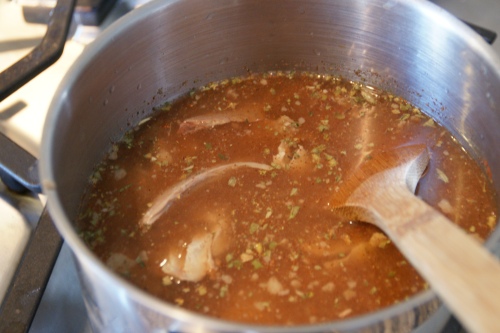 from blah to ooh la la

In a saute pan, coat the bottom of the pan with olive oil on medium heat.  When the oil is shimmering, add the onion and saute til softened.  Add the garlic and chile and cook another minute or two.

Cook the aromatics til softened

Add the shredded turkey meat and 1/2 turkey liquid.  Cook briefly til most of the liquid has evaporated.  Set meat aside.

Just a little turkey juice to pull everything together…

Make the tamale dough by whisking the masa, salt and baking powder in a medium bowl.  Add the lard. 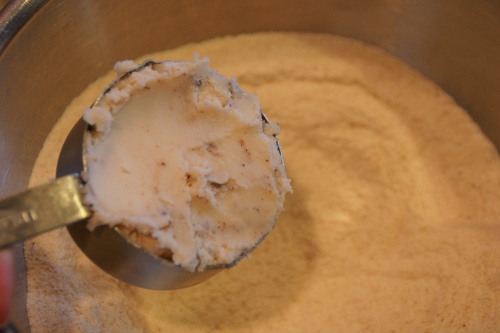 From my stockpile of bacon fat…

Use your fingers or pastry cutter (I used the cutter) to combine the masa and lard. 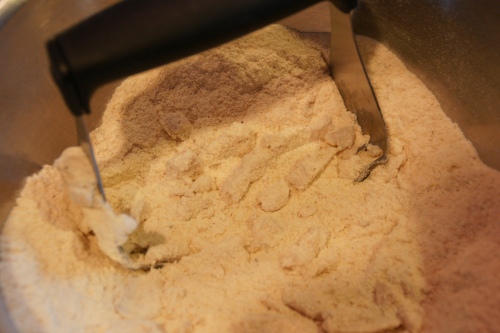 Cutting in the lard

You’re aiming for a mixture that looks like cornmeal, or slightly more coarse. 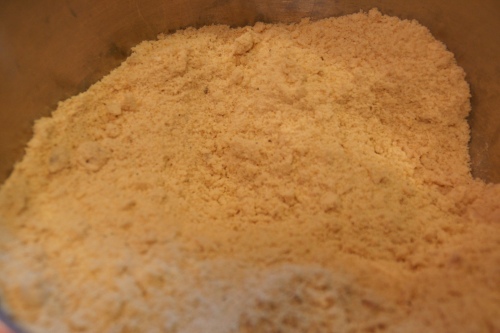 Flakes of lard and masa…

Add the liquid, 1 cup at a time, until the dough just comes together.  I used about 3 cups of the liquid.  It should be wet, but not sticky.  Cover the bowl with a towel or plastic wrap and set aside. 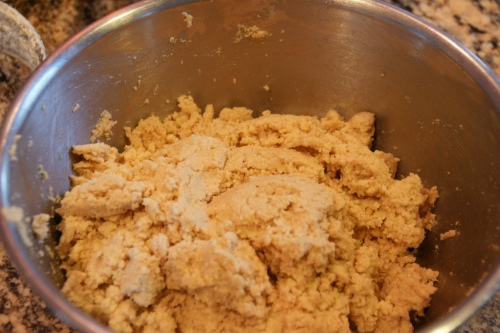 Dough is ready– squishy, but not sticky!

To assemble the tamales, first make sure you have everything in place:  the husks, a surface for assembling, the turkey and the tamale dough.

I flatten a softened husk on a plastic cutting mat (the silicone kind) and layer the masa on top of the husk.  You need to leave a 1/2-inch border around the sides and a 1 to 2-inch border at the bottom (narrow) end of the corn husk.  Then I add a few spoonfuls of turkey filling down the center.

Note the border along the edges.

Now comes the tricky part.  Using the edges of the husk as an aid, wrap the masa dough around the filling.  You don’t want to wrap the husk too tightly because the dough will expand when steaming.  Fold up the lower end and place on a tray.

This corn husk was HUGE.

Continue making the remainder of the tamales.  Several of my wrappers were HUGE.  Next time, I may go through the dry husks first (if I can separate them) and look for ones that are all equal in size!  I usually get two dozen, but only had thirteen this time. 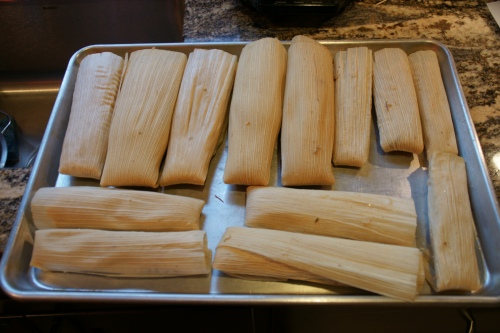 Several of these tamales were 3x’s the size of the others!

Once all the tamales are made, group them in bunches of three and tie them together with kitchen twine.  I tied the really large ones two in a bundle:

Bundled helps keep the tamales standing up in the pot, I guess. Just doing what Alton says…

I usually steam the tamales as Alton recommends because I have one of those tiny basket steamers that opens up.  I actually put the opened basket steamer inside my pasta insert so I can have more water in the pot.  I usually don’t have to add more water this way during the steaming process.  Add the tamales, trying to get them to lean towards the center, not touching the sides of the pot:

Just waiting for the steam.

Bring the water to a boil, cover and reduce heat to a simmer.  Steam for 1 to 1 1/2 hours, adding boiling water as needed by pouring along the sides of the pans– NOT directly onto the tamales.  The tamales are done when they separate easily from their wrappers.

I usually let the tamales rest in the pan, covered with a damp towel for about 10 minutes so they aren’t so hot to handle.

Unwrap and eat.  Kurt and I like ours with a little Tabasco…

A dash of Tabasco– vinegary and hot!