Recipe Testing for You and Me: Make-It-Your-Own Turkey Pasta Dish and Ritz Crackers

I was all set to make turkey tamales today; I use the Alton Brown recipe, but I’m hoping one day my sister’s good friend Mariela will show me how to make them authentically.  I had already determined that I would need to create a broth not only to season my plain old roast turkey to taste like the stewed drumsticks in the recipe, but also to mix in with the masa for the tamale dough.  Alas, I didn’t have enough masa or corn husks to proceed and I was NOT going out in the rain.

So I decided to divide the remaining turkey meat and try for tamales tomorrow.  Grace had suggested that I take the leftover turkey, chop it and add it to the leftover homemade green bean casserole (the Pioneer Woman dish seasoned with BACON and cheddar cheese).  I decided to add bow-tie pasta (farfalle) and make it another one pot meal.

I started by dumping the leftover green bean casserole into a medium sauce pan; I knew I needed to thin the roux-based sauce so I added some chicken broth and cream to the pan and heated everything on medium low.  I then put a pot of water on high heat to boil for the pasta.

I decided to simmer the chopped turkey in some chicken broth along with a couple of thinly sliced cremini caps (just because I had them).  I put in enough broth to cover the bottom of the pan and partially cover the meat.  I threw the sliced cremini caps on top, turned the stove to medium heat, clamped on a lid and let the broth come to a slow simmer.  I stirred the mushrooms into the broth and let the contents simmer for about five minutes, then turned off the heat.

I checked the the consistency of the green bean casserole sauce and saw that it had thinned enough to coat, but not smother the pasta.  I removed the turkey and mushrooms from the broth with a slotted spoon and added them to the green bean mixture.  I kept the pan on low heat until the pasta was ready.

I drained the pasta and added it to the other ingredients, stirring to combine.  I tasted for seasoning and dished it out to the family.  We had just one little container left:

The guys LOVED it!

Clearly you may not have made the PW green bean casserole, but you may still want to try to recreate this kind of dish.  Below is how I would do it in a hurry– meaning with canned soup and frozen green beans– and heated in the oven.  Consider it your test recipe!  I haven’t made the dish this way, but I’m using the same techniques you’d find for any canned soup casserole.  The ingredients are more general guidelines than strict measurements.  If you try it, let me know what you did!

Preheat the oven to 375 degrees.  Spray a medium size casserole dish with cooking oil.  Cook pasta to just under al dente (pasta will cook more in the oven).  Reserve one cup of pasta water before draining pasta.  Set pasta aside with reserved water.

Place the turkey and broth in a small sauce pan; bring to a simmer.  Clamp on a lid and let simmer for five minutes.  Turn off the heat and set aside (leave pan covered).

In a large saucepan, heat the mushroom soup and half and half until bubbling.  Take the pan off heat and stir in the grated cheese.  Add the drained green beans, bacon and onion powder.  Stir to combine.  Taste for seasoning.

Remove the turkey from the broth with a slotted spoon and add to the soup mixture, stirring to combine.  Add the drained pasta and mix well.  If there is not enough sauce, add chicken broth and/or pasta water til everything holds together; it’s ok if it’s a little wet as the dish is going into the oven to cook further.  Taste and adjust seasonings.

Pour into the casserole dish and bake in the preheated oven for 30 minutes or until bubbling.

After dinner, which was early because of– what else– changes in Ken’s activity schedule, I went about testing a homemade Ritz cracker recipe.  You can find the it here.  Ken loves Ritz crackers and the ingredient list on the box is…mysterious.  I doubled the salt because one comment was that the cracker wasn’t salty enough.  I blitzed the dough in the food processor; it was just like making pie crust.  However, I was totally unprepared for the consistency of the dough– it’s more like tortilla dough than pie crust!  I think next time I will let the dough rest a little before I roll it out. I also had some problems with keeping a consistent thickness, but I think that’s because of the baking powder.

My first tray tasted completely blah and unseasoned– that’s after brushing the tops with a melted butter/salt mixture when the crackers came out of the oven.

Brushed with melted butter/salt after baking. “BLAH!” said the guys.

So I experimented.  I made a second tray with the butter/salt mixture brushed on the crackers before baking so I could sprinkle extra salt on top.  Way.  Too.  Much.  Salt. 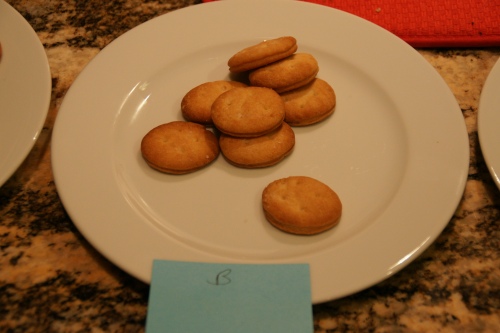 Brushed with melted butter/salt and then sprinkled with more salt. “I almost spit that out!” said Ken.

Then I made a tray where I brushed the crackers before and after baking.  Better.

Brushed before and after baking. “They’re OK, but not buttery enough.”

Finally, I got fed up with the whole thing and brushed the crackers TWICE after they came out of the oven.  (As I watched the crackers absorb the butter during the second slather, I wondered how many calories were in a single Ritz cracker).  This one was the winner, but the guys said they still needed work.  So I’m going to experiment a bit more and post when I get it PERFECT (at least for my family).

The WINNER! (sort of)