Nothing is better when a friend sends you a recipe she’s tried– especially when you know you are simpatico with her palate.  My friend Jacki sent me a recipe for BBQ ribs; instead of cooking them for hours on low heat and basting them for the last 30 minutes or so, these you boil in a seasoned broth and then cook again in a slow oven.  The other part of the recipe said to serve with mashed potatoes that are boiled in the cooking liquid.  Jacki said the flavor was very good, so I was all in!

I did make a a few changes to the ingredients.  Jacki made the recipe because there was a 2 for 1 sale on country ribs at her local Giant, but mine had NO country ribs.  However, they had baby backs on sale, so I bought a rack which was about 2.5 pounds.  I also didn’t have enough garlic powder, so I used 4 cloves instead.  Here’s the original recipe with my changes in parentheses:

Use a big pot!

Bring the pot to a boil then cook ribs until tender (45 min to 1 hr).  I covered the pot when it came to a boil and simmered for 1 hour.  Turn off the heat and let ribs stand, covered, for several hours.  (This is an optional step; I let mine sit for about 2 hours while I ran errands).

Preheat oven to 325 degrees.  Take ribs out of the pot and place on a 9×13 baking dish.  (I used a rimmed baking sheet; the baby backs were so tender that the broke in half when I lifted them out of the pot)!

Place in a baking dish or rimmed baking sheet.

Pour sauce over ribs.  Since mine were baby backs, I brushed the sauce on both sides.

Coat both sides of meat if using baby back ribs.

Cover the pan with foil and bake in the preheated oven for 45 min to 1 hour.  If using country ribs, test for an internal temperature of 160 degrees.  I just left the baby backs in the oven for that time.

About 30 minutes before the ribs are done, strain the cooking liquid and heat to boil a few potatoes.  I had three big Yukon golds that I peeled and cut into quarters.

Strain the liquid before boiling!

Cook potatoes until fork-tender.  For me that was about 15 minutes.  Drain the potatoes and mash, adding whatever liquid and fat you usually use.  I use half and half and unsalted butter.  You won’t need any seasoning because the potatoes were cooked in the seasoned broth, but taste just to check! 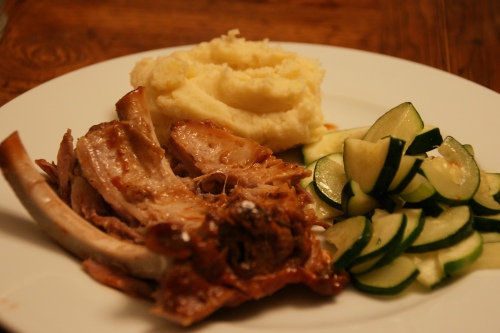 The guys said it was a keeper but “next time, make collard greens instead of zucchini…and CORNBREAD!”  (They like to keep me on my toes…)