My First Quilting Expo With Amy!

Many years ago, I took a quilting class at our Centreville G Street Fabrics; G Street is an old DC sewing store (it was originally on G St until the 80’s).  I made a log cabin quilt top in a day and was hooked.  Unfortunately, the last quilt I made was almost 20 years ago for my sister, and today it remains unfinished; Tina says it’ll end up as her death shroud.  Whatever, it’s a queen size quilt and finding a surface to spread it out to finish is impossible with a basement floor strewn with Ken’s Legos, Nerf bullets and empty shell casings saved from trips with Pap-pap to the gun range.

I posted a few months ago that I took a second quilting class with my childhood friend Amy.  She was the first neighborhood friend I had when my parents transferred me and Tina from a French school to an all-girl Catholic school; I absolutely hated the new school since we wore uniforms and it seemed crazy to me to have only girls as classmates.  Amy also gave us our first dog, Jayson; he was a stray she found sleeping under the bushes in her family’s front yard.  She came by one day and asked if we wanted him.  He was our best dog ever!  Even Grace, the pet non-enthusiast (“Koreans don’t have pets”), liked him.

Amy is addicted to quilting; her sewing room is full of quilting rulers, machines (she has two!), a big ironing board wrapped in batting and muslin, a quilt design wall to lay out her blocks, and tons and tons of fabric!  It’s awesome.  She just finished a 10-week class on quilting techniques and made a quilt sampler of all the blocks she crafted.  She said she’d take it again if I ever decided to enroll.

Of course, when she told me about the quilt expo in Baltimore, I knew I had to go, especially after she added “the exhibit hall has every kind of fabric and quilting supply you’d want– bring lots of cash or plastic.”  Amy still lives in the neighborhood where we were grew up, in the home her grandfather built, so I trekked from NoVa to DC and she drove to Baltimore since she knew the convention area.

My, what an experience!  We took classes in the morning. In the first class, we practiced machine quilting.  What a disaster.  I couldn’t move the quilt top around to “draw”;  let’s hope I’ll be better with a stencil to guide where I’m supposed to go! 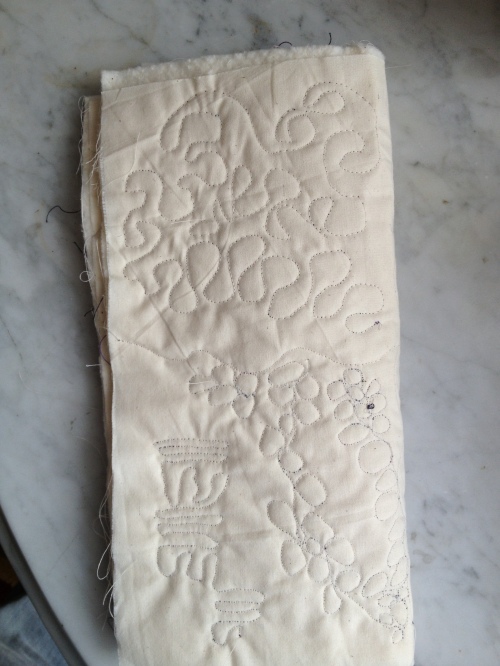 The second class was easier for me; it was block construction and since I can sew a straight line, the result was much better.  I may actually finish it!

In the exhibit hall, my curiosity for quilting quickly ballooned to Amy’s level of obsession; I realized that those rulers Amy had make block construction much easier, and that fabric is sold pre-cut in “layer cakes,” “fat quarters,” and “jelly rolls.”  I also learned that many quilters only construct the quilt top and send their work to be finished (backed and quilted) by people who own “longarms.”  Having a credit card on hand was a dangerous proposition, but I only bought items that Amy said were “a good deal.”  Now to clear out the craft room… 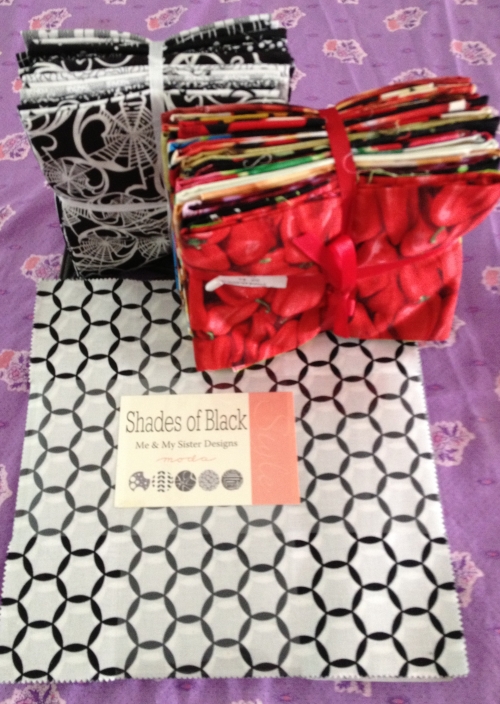 As much as I love my new hobby, I love even more the fact that I’ve reconnected with Amy.  Even after so many years living our separate lives– not to mention the fact we’re on opposite ends of the political spectrum, we can still finish each other’s sentences.  Now that’s what a 41 year old friendship will do for you…

Luv ya, Amy!  Can’t wait to start our quilting sessions!

3 responses to “My First Quilting Expo With Amy!”