Rhubarb is one of those food items (officially deemed a “fruit” instead of a vegetable through a 1947 NY law because it was cooked into pies) that I never ate growing up in DC.  Strawberry pie, of course, but rhubarb?  The first time I spotted the stalks in the grocery store, I thought they were some kind of celery!

Grace began baking rhubarb crumble a few years ago; I think she got her first batch from a CSA in the Hamptons.  She was forever tell me how good it was, and how her husband would eat any leftover, spoon in hand, directly out of the baking dish.

One spring day, I finally caved and bought some stalks from the farmer’s market.  She emailed me her recipe– and it was easy and as addictive as she promised.  The sweet/tart fruit and crunchy, crumbly top are a fantastic taste and texture combination.  Just add vanilla ice cream or whipped cream and you’ve got a party dessert!

I bought some rhubarb today; it’s so hot here that I think a fruit dessert à la mode would be perfect.  I had to email Grace to send the recipe again since I was unable to locate it in old email (I usually never delete anything).  When I read the ingredients, I realized I forgotten that the recipe calls for SIX cups of sliced rhubarb– there was no way I had enough!

Quite serendipitously, I had also purchased 2 pounds of strawberries, and Grace said I could make up the difference with them. She personally loves it with the strawberries.  With all those juicy berries, I wanted to add some extra flour or cornstarch to the fruit, but she said she never does that and it comes out fine.  And it did!

Preheat the oven to 350 degrees F.  Lightly spray a casserole with cooking spray.  Set aside

I only had 3 cups of sliced rhubarb, so I sliced three cups of strawberries:

I used equal amounts of rhubarb and strawberries

Toss the chopped fruit with the 1/3 c sugar and cinnamon.  Set aside. 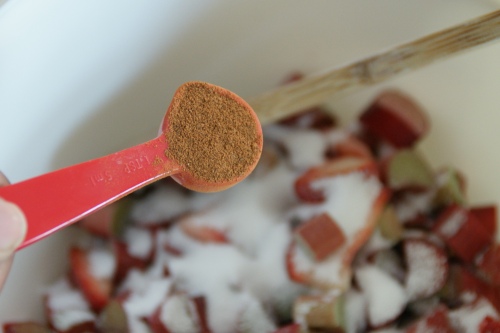 Some sugar and cinnamon– how simple, yet delicious!

In another bowl, mix the flour, salt and baking soda.  Tumble in the cubed butter.

Use a pastry cutter to evenly distribute butter into the flour

With a pastry cutter, cut the butter into the flour mixture until the mixture resembles coarse meal.  You should be able to pinch the mixture into little clumps. 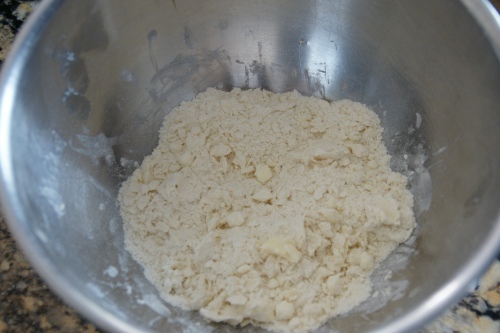 Add the sugar, oats and nuts.  Mix well to combine.

At this point, I start clumping the topping into chunks (they are super crunchy after baking).

Love those chunks of crunchy topping…

Pour the fruit into the oiled casserole. 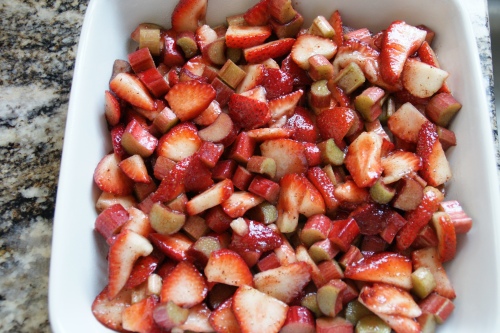 Sprinkle the clumped mixture over the fruit.

Bake in the preheated oven for 40 minutes until the fruit is bubbling and the topping is lightly browned. 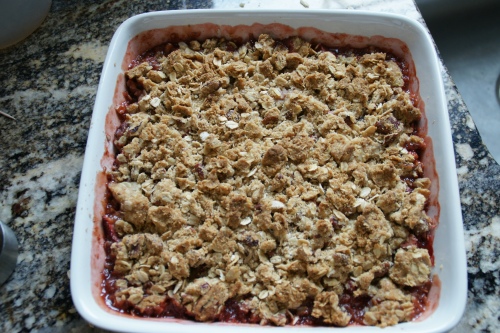 Let the crumble cool so the juices can thicken a bit!

or just straight up!

THIS is what I can eat right out of the baking dish!