A Diabetes-friendly Dinner That Even My Sister Would Approve!

My high school gal pal Jacki is a fellow foodie; she’s one of the moms in the Mommy dinner group on whom I can always rely to try every dish I make– but then she has eaten crickets.  Or was it grasshoppers?  No matter, we like to talk about recipes (she is a very good cook), and how we like to experiment with flavors and textures.  Like me, she also buys serving ware that will showcase her food.  Totally simpatico.  As we speak, she’s preparing for a huge Thanksgiving at her home where some 30 or 40 relatives will congregate for some good eats.

Last night, I made her baked sweet peppers stuffed with quinoa and black beans.  She also gave me a red lentil dal recipe, but getting Ken to eat Indian is a major ordeal, except for a Nigella chicken dish which he swears is not “real” Indian fare.  When Jacki posted her pepper pics on FB, they looked so good; as a diabetic, I LOVED the fact she used quinoa which has a lower glycemic load than white rice– what I typically use for stuffing, along with ground beef and sausage.

Glycemic load is a measure of how quickly a food raises one’s blood sugar; since diabetics lack the ability to regulate blood sugar levels (no insulin production or poor use of insulin by the body), foods LIKE WHITE RICE with a higher glycemic load, are not a good food choice.  (I’m sure my sister Tina, the diabetes educator, will post a comment below if I scrambled any of this information).  Quinoa, on the other had, is the miracle food.  It’s not a grain, but a seed, so gluten-free.  It is a “complete” protein, meaning it contains all the essential amino acids (like MEAT!).  Most vegetarians have to eat a combination of foods, like beans with rice, in order to get all the essentials.  Important for diabetics, quinoa has a good fiber content and lower glycemic load than rice.  I couldn’t wait to try this recipe!

The fixins’ for some good eats

Chop the onion, jalapeno (that one was pretty big) and celery.  Mince the garlic.

I thought I’d put in a shot of quinoa– it is really teeny-tiny; they’re seeds, after all!

These seeds SWELL in size when cooked!

Heat the oil in a big pot over medium heat; add the chopped onion, celery and jalapeno.  I season with some salt and then saute the mixture until soft, about 5 minutes:

Add the cumin and garlic; stir and cook for another minute:

I had Pomi chopped tomatoes, so I measured out about 2 cups and drained them (keep the juice).

Drain over a bowl and keep the juice for the baking pan.

Then add the drained tomatoes and stir to combine.  I season again at this point with salt and pepper.  Simmer the mixture until most of the liquid is gone.

Let most of the liquid evaporate.

Then add the quinoa. 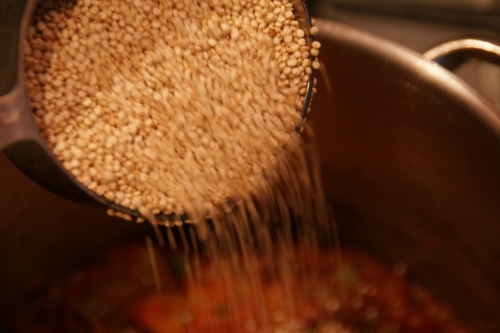 See how tiny the seeds are? They swell four-fold!

Add the water, stir to combine and bring to a boil.  Reduce to a simmer, cover and cook for 15 minutes. Preheat the oven to 350 degrees.  Spray a large baking dish with cooking spray. 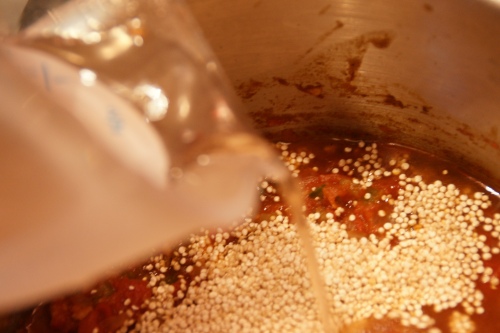 In the meantime, prepare the peppers by halving them lengthwise, seeding and de-ribbing: 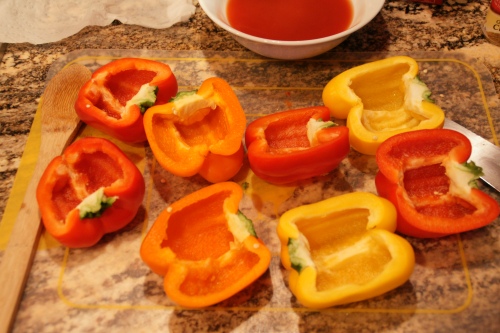 They look pretty cut lengthwise with the stem intact!

I steam my peppers in the microwave to soften them; otherwise I ALWAYS end up with either undercooked peppers or overcooked stuffing.  Place the peppers in a dish with some water on the bottom; cover in plastic wrap and microwave in 2 minute intervals til softened. 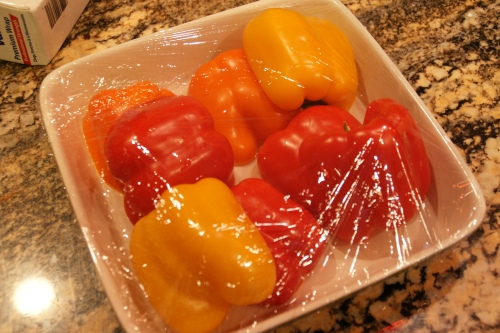 I microwave on high in 2-minute intervals. You want the skins to be softened.

After 15 minutes, add the black beans to the quinoa.  Stir and re-season with salt and pepper.

Heat the beans for 5 minutes, then add the cheese, mixing well to melt and combine with the quinoa and beans.

My stuffing looked a lot wetter than Jacki’s did in the FB photo, but she said she had made hers ahead of time, so I forged ahead and stuffed the peppers, drying a few out with some paper towels if they held excess water.  I poured the reserved tomato juice into the bottom of the pan.

Stuffed and ready to bake.

Cover the pan with foil and bake in the preheated oven for 40 minutes.  Serve with pan juices.

Kurt liked this dish, but thought it needed more texture; I think he’s just used to having hunks of sausage and ground beef in the filling.  For a “vegetarian, light” dish, he thought it was very good, so it’s a thumbs-up.  I loved the flavor of the filling; next time, I will most likely season the insides of the softened peppers with some salt.  The filling is so well seasoned, the pepper tasted somewhat bland to me (but it could be because  it’s WINTER and peppers aren’t in season).  For Kurt, I may add toasted pine nuts to make the stuffing feel “heartier.”

Thanks, Jacki, for a yummy, healthy dish that the carnivores approved!  If only I could get them to do multi-grain bread and pasta…

3 responses to “A Diabetes-friendly Dinner That Even My Sister Would Approve!”