A laid-back Thanksgiving with Grace

Our Turkey Day menu for FIVE: 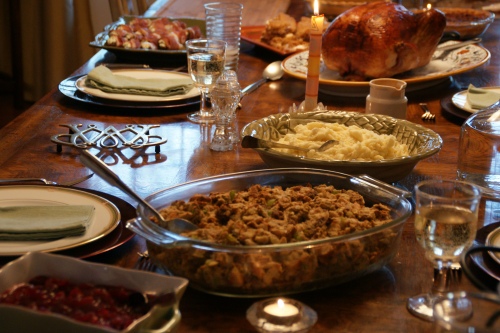 Yes, that is just to feed five people.  I can’t do a small Thanksgiving very easily and I want to see a whole turkey vs. a breast on the table.  Tina and Jeff had decided to forego any family this year and WENT TO A RESTAURANT (granted a fancy restaurant, but still…).  Nevertheless, I knew she’d stop by on Saturday and pick up some leftovers to ensure my little family of four wouldn’t be eating leftovers for a week.

I’m sharing just the cranberry relish and pecan pie recipe; the others are from cookbooks or websites as noted above.  The stuffed dates are worth making; unlike my other date recipe (stuffed with an almond, wrapped in bacon and baked), these require absolutely no cooking and you can make them ahead of time.  Just remember to bring them out of the fridge early enough to come to room temperature before serving.  The stuffing recipe is based on one from Paula Deen; I withheld the rice (both Kurt and Grace said “either rice or bread stuffing, not together!”) and it is a very traditional flavor profile.  We had a bit of a snafu with the artichoke dip; Kurt told me it was in one his Southern Living cookbooks and I picked the wrong one.  He said it was easier to make, but all of us agreed the other recipe was much better.

The green bean casserole from Pioneer Woman was the sleeper hit.  I cook with canned soups only when I’m short on time; I can whisk together a basic bechamel in minutes WITHOUT the heavy salt and preservative load; this recipe is an extension of that technique.  I’ve posted previously on how to make a roux (mac ‘n’ cheese); I added thyme and ground bay leaf to the recipe and omitted the pimientos (high risk of rejection by Ken).  Grace suggested I added chopped turkey to the leftover beans; I think I’ll do that and mix it with farfalle (bow-tie pasta) or penne for a quick dinner on one of Ken’s activity days.

Grace’s cranberry relish is so much better than the canned stuff and very easy to put together (trust me, she doesn’t like to do super-complicated recipes– when we made the s’mores bars, she didn’t want to cream the butter and sugar as it meant getting out the hand mixer).  She was a good sport about letting me take mutliple photos of her cooking, even when I kept telling her she needed to move her hands closer to the boiling cranberry sauce for a better shot!

Combine the sugar and water in a saucepan; heat until sugar has dissolved and mixture is boiling. 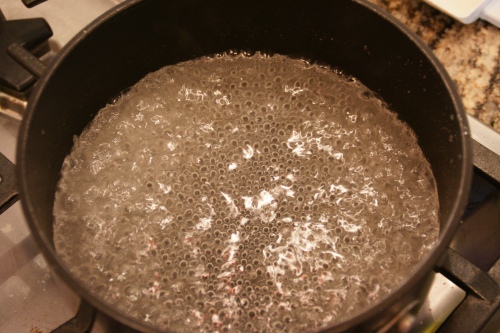 Make sure the liquid is boiling!

Add cranberries and bring to a simmer, stirring occasionally. 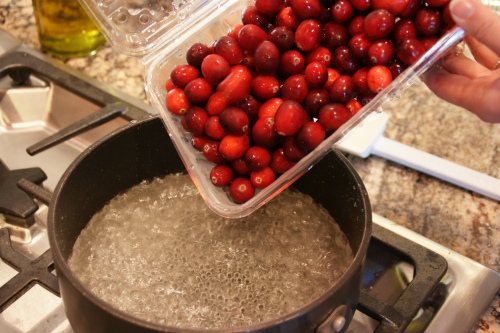 The cranberries will begin to burst; stir occasionally. 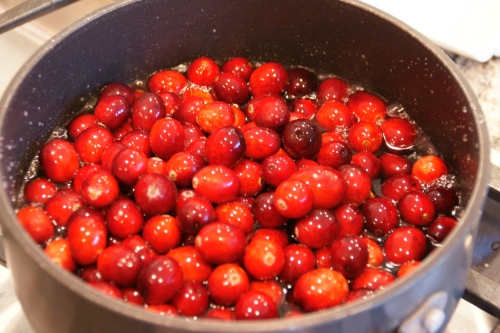 Cranberries will make a popping sound as they burst!

Simmer the sauce until thickened. 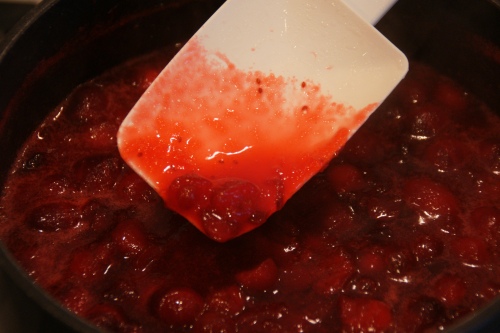 Cranberries have all burst and sauce is thick.

Take the pan off heat and add the lemon or orange zest.  Stir to distribute.  Notice Grace’s teeny tiny hands vs. mine! 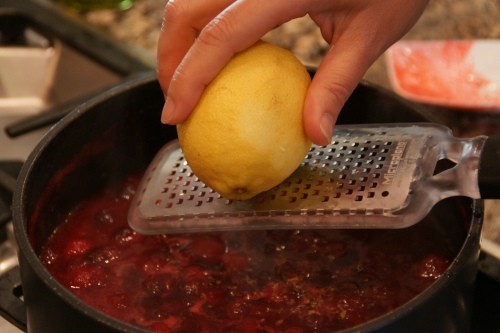 Make sure you don’t grate any of the pith (white layer). It’s bitter!

Add cinnamon.  Pour into a serving dish and cover with plastic wrap to prevent a skin from forming. 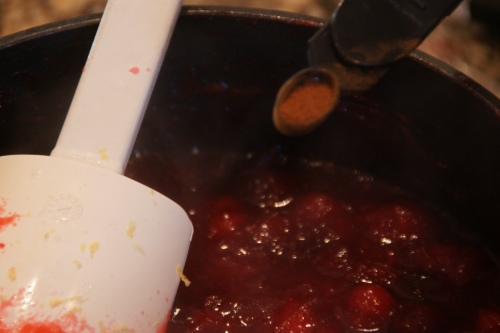 Adjust cinnamon to your taste.

You can leave the relish out at room temperature, but at risk of people “tasting” it before dinner!

The other recipe today is one I developed a few years ago after bringing home a pie from Asheville, NC for Kurt.  I think I made three pies before I was happy with the result.  I love the brown butter flavor in this pie! 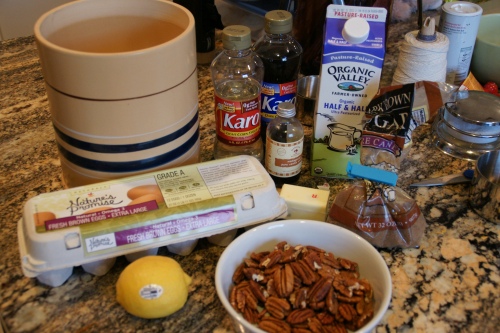 A little of this and that

Preheat oven to 350. Take pie crust out of refrigerator for 15 minutes, then press into glass pie plate. 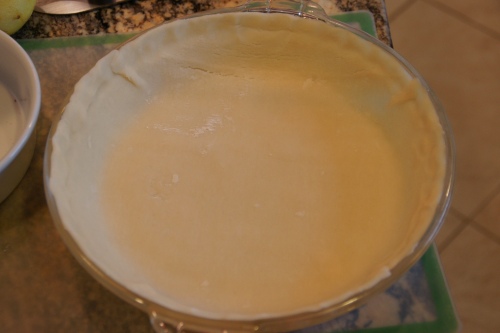 I usually use a regular pie plate, but I used that for the pumpkin pie and only had the deep dish…

One of the key flavors in this pie is the browned butter– not just clarified, but BROWN.  It adds another level of “nuttiness.”  I think this is what makes everyone tell me it’s the BEST pecan pie they have ever had (in a store-bought pie crust, no less)!  Here’s how you brown butter: 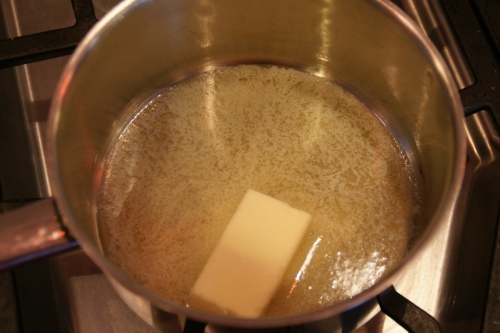 No higher than medium low heat (use low if you’re worried about burning).

The butter will foam and begin making a sizzling sound.  This is OK.  The foam consists of the milk particles; the sizzling is the water evaporating. 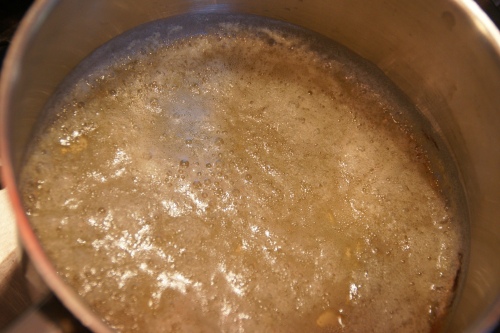 Foam and sizzle is what you want to see and hear…

Eventually, the sizzling will stop (water is all gone) and the solids will begin to drop: 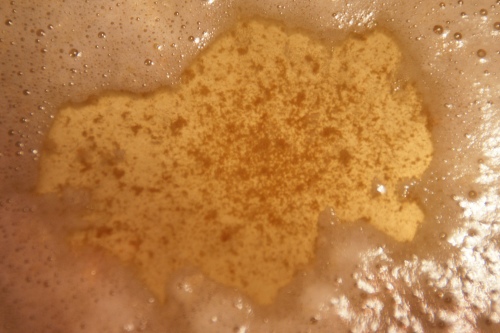 First signs that butter is on its way to brown…

Swirl the pan and wait for more solids to drop:

Solids continue to precipitate to the bottom of the pan

When most of the foam is gone and there is a coating of solids on the bottom, the butter will quickly begin to brown: 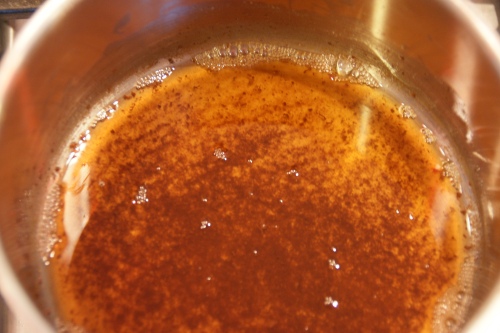 The butter will begin to have a nutty aroma; watch for burning!

I continue to watch the butter a little longer til it’s a bit darker (without burning), then I pour it through a strainer lined with cheesecloth.  However, I only had enough cheesecloth for my turkey, so I just used the strainer: 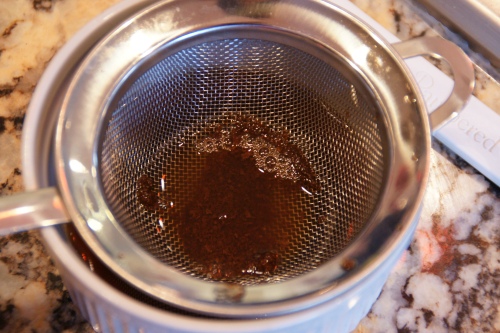 Use a cheesecloth (which I didn’t have) with the strainer to separate the fine particles.

This is how dark I take the butter.  The solids on the bottom got through the strainer and make the butter look very dark, but it isn’t burnt. 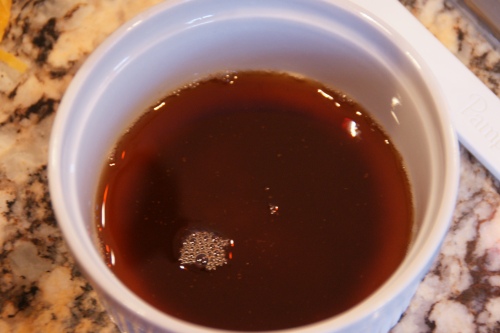 The dark solids do NOT go into the pie filling. I poured the butter into a small bowl with a lip so I could control what I poured out!

Set the browned butter aside til time to pour into the filling (see below). 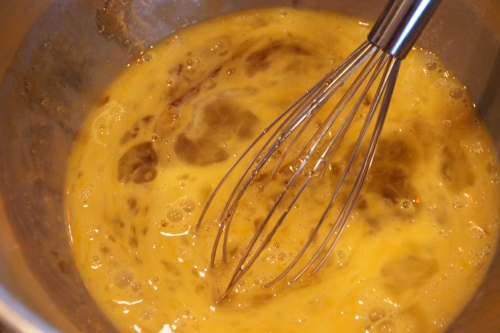 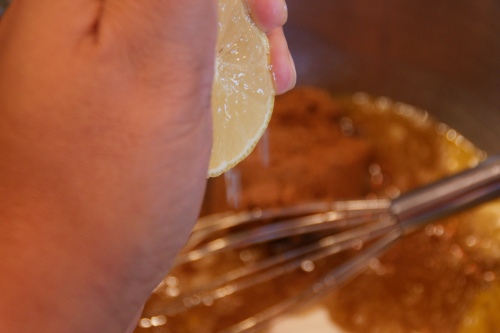 I cut 1/3 off a lemon and squeeze directly into the filling (make sure to catch seeds).

vanilla and half and half. 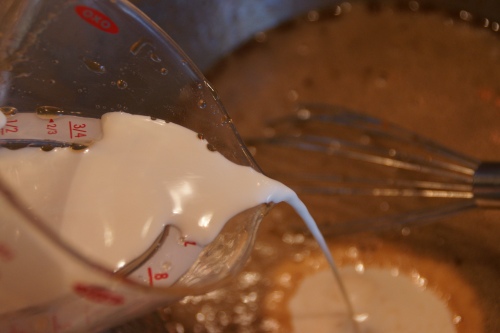 Make sure vanilla and lemon juice are whisked before adding half and half.

Blend and then add browned butter (can still be warm, sometimes it is hot and the filling sizzles, but just keep blending). 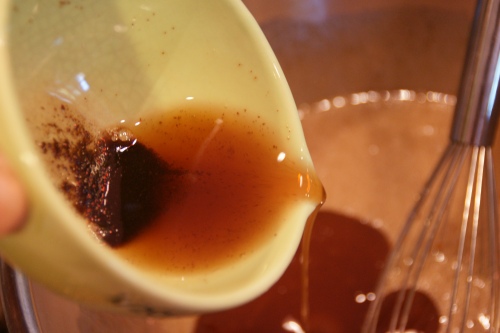 Make sure you don’t pour any solids into the filling! 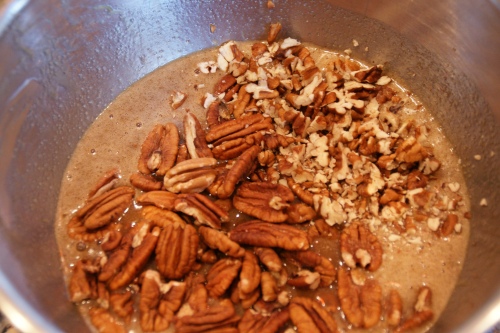 Stir in pecans slowly, but thoroughly.

and pour into pie crust. 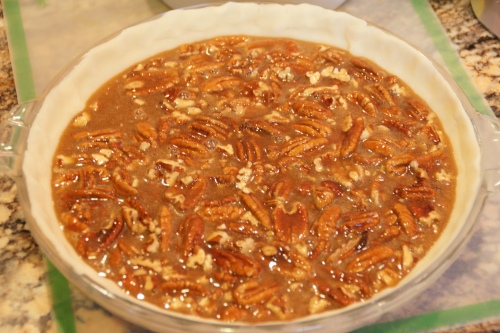 Ready for the oven

Put on cookie sheet and bake for 55 minutes or until the filling is not too jiggly– I test with a thin knife– it should come out clean and pie should be fairly firm. 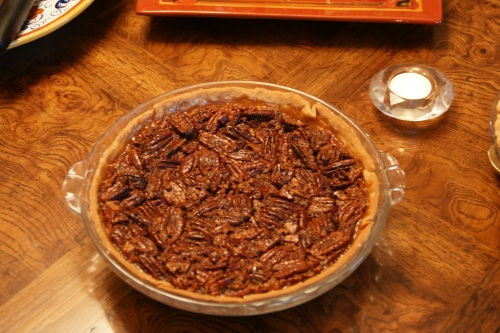 All in all, we had a great day.  Cooking throughout the day with appetizers around lunch, then slowly working our way to an early dinner so we could watch the Redskins.  We even took a healthy walk and played some games before we had our multiple desserts.  A laid-back Thanksgiving indeed!

Now to brainstorm some new ideas for the leftover turkey…

2 responses to “A laid-back Thanksgiving with Grace”