Hot and Spicy for Cold and Wintry

It’s cold in and around the nation’s capital; for us, that means in the 30’s.  It’s soup and stew weather and I found a perfect recipe on Pinterest from the Pioneer Woman.  Creamy cheese grits topped with a rich and spicy beef stew. I made it the Wednesday Grace came down from NY; I had been planning to make Jacki’s dal recipe, because it would be a light meal before Turkey Day, but Grace, like Ken, is a big grits fan.

The stew is made with canned chipotles in adobo sauce– an ingredient I had never before used, so it took me a while to find it amidst all the other canned and jarred peppers in the Mexican food aisle.  I ended up buying two 7 oz cans instead of a single 11 oz can and used 1 1/2 cans.  It’s a very filling meal; this recipe makes a lot– way more than my family of four could eat in a single meal, especially the pot of grits!  No matter, grits are one of Ken’s favorites and he warmed them up for breakfast!

The Pioneer Woman’s recipe is here.  I think she does a good job showing you how to make the stew, so I’m just posting my “afterthoughts.” 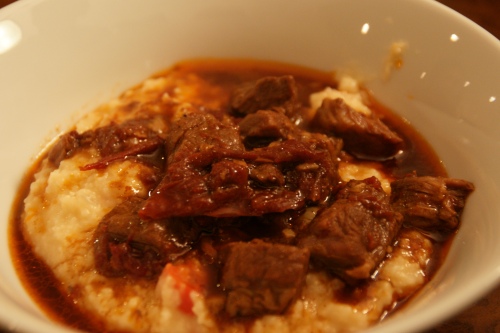 First of all, I think the stew is way too spicy.  The creaminess and fat level of the grits lowered, but did not sufficiently mitigate the overall spiciness and heat of the stew– and I’m talking about people who eat kimchi, top prime rib with prepared horseradish (not the sauce) and order dishes like drunken noodles “Thai hot.”   Next time, I would use half the 11 oz can of chiles, or in my case, a single 7 oz can instead of the 1 1/2 cans I dumped into the meat.   I may even just reconstitute dried chipotles in beef stock and use that because the adobo sauce was a bit too salty for me.  I also did NOT need 6 cups of broth; I used five cups and I had way more liquid than the pictures in PW’s blog.  She had to be at a near boil for that much to evaporate in 2 1/2 to 3 hours; I tend to cook stews VERY low and slow.  I probably could have used a quart with additional water if I needed it.

Secondly, I did dice up my own chuck; in addition to being cheap,  I am phobic about all those hands that touch prepared meat and the increased surface area for germ growth.  Next time, I will trim all the visible fat from the meat chunks; I thought the added flavor would be good, but there was just too much fat in the end product.  My alternative is to make the stew ahead of time, refrigerate it and then skim off the cold fat layer.  I did this with the leftover stew and it was perfect!

Thirdly, I would make way less grits– maybe half the recipe.  I don’t think the 3 lbs of stew meat would feed 12 as the recipes says, but I sure think the grits would.  Thankfully, there’s Ken and my mom to heat them up with a little cream and beef broth.  I also foolishly forgot that the grits expand significantly when cooked and used a pot that was barely big enough once the grits got going, so remember to use a pot that’s twice the volume of the cooked grits! For my family, I would also nix the onions and red peppers; I personally liked the added flavor, but the traditionalists here prefer them without that added texture.