My Own Taco Soup WITHOUT the Packaged Seasoning!

I just can’t write about baking any more, even though I still have a few cookies to make– the rest of the sugar cookies for Ken and Grace to frost when she’s here, bourbon balls for my brother-in-law Jeff, more anise un-puffs and amaretti cookies (if I can find the brand of almond paste I like– the one in the can, not the plastic-wrapped tube like pre-cooked polenta– YUCK).

I have been making dinners, many spur-of-the-moment creations born from my desire to use up foodstuffs like wilting produce, dairy close to expiration or packages of meat about to undergo freezer burn.  For example, the other night I made a creamy rigatoni with a carton of creminis, leftover roasted Brussels sprouts, a thawed boneless chicken breast and the remaining half of a tub of mascarpone.  It helps to have pantry items like chicken broth and a variety of dried herbs on hand!

Last night I roasted a spatchcock (aka butterflied) chicken that I had liberally rubbed on both sides with a combination of left over pulled pork rub that Kurt uses in his smoker and a jerk rub that I made from an online recipe.  I butterflied the chicken because I waited too long to start dinner on a “Ken activity night,” so I needed a way for the chicken to cook faster.  I should have taken pictures of the process since I think it’s a skill that every home cook should have under his/her belt– but I was too rushed to stop and photograph each step.  I didn’t even bother to save the backbone because that would take an extra five minutes; I just tossed it in the trash with the bits of fat I had trimmed.  The roast came out great; I served it with mashed cauliflower and green beans.

Tonight Ken had an extended violin lesson because his teacher is also a school orchestra director with his share of holiday concerts that required us to double up on lessons.  In addition, Kurt was taking Ken to a NIGHT SHOWING of The Hobbit.  NIGHT as in TEN-THIRTY AT NIGHT.  My child goes to bed at 9:30!  When I reminded the pair of this fact, Kurt responded, “It’s worth it; we’re going to see it in 3D;” my son said, “We’re just having a pizza party tomorrow.”  I guarantee I will be asleep when they return.

For dinner, I decided to use up the rest of the spicy sweet roast chicken.  I can’t have precious refrigerator space commandeered by leftovers with Christmas around the corner.  I wanted to make a taco soup, but when I searched online, all I found were recipes that called for packaged taco seasoning.  I know Kurt hates that stuff.  So I decided to make my own version, based on my experience with Tex Mex dishes.  To my surprise, I found two Anaheim chilies lurking in crisper drawer and they were in good shape (I have no idea when I purchased them).

I went to the store to buy canned corn and some Rotel canned tomatoes with chilies.  I have lots of plain old tomatoes, but I thought the Rotel brand with chilies would have the right southwest flavor.  I bought canned pinto beans, dark red kidney beans, yellow corn and two cans each of Rotel tomatoes– one with chilies, the other with cilantro and lime (I hadn’t seen them before but the can reminded me of the ATK white chicken chili (see post here), so I thought they’d be good).  I also bought some red and white tortilla chips, sour cream and four-blend Mexican cheese for toppings.   I grabbed a package of ground turkey, too,  because I wasn’t sure if the chicken breast would be enough meat– but it was, so now I have to figure out what to do with the turkey!

I ended up with a big pot of soup; it can probably feed 6 well.  Everyone loved it; in fact, Kurt, who had gone out for a big office lunch and claimed he “wasn’t that hungry,” had seconds!

Here’s the full ingredient list and how I put it together:

I pulled out every “tex mex” spice that came to mind: onion and garlic powder, paprika, chili powder, cumin (of course), and oregano.

Seed and de-rib the peppers, then cut into chunks.  Peel the onion and cut in half.  Place into the work bowl of your food processor and pulse ’til it looks like this:

Chopped but not pureed

Heat some olive oil in a pan over medium heat and add the chili/onion mixture.  Sprinkle with salt and pepper and saute ’til softened.

Add all the spices and stir to combine.

I was lazy and didn’t measure these all out ahead of time, so I was foolishly trying to pour the ground spices as quickly as possible so the veg wouldn’t burn…

Add the tomatoes and water; stir to combine.  Bring to a simmer and cook uncovered for 5 minutes.  At this point, I tasted the soup to see if it was seasoned well.  I had originally started with 1 TB of cumin, and added another teaspoon.

This is when I realized I had a LOT of soup… 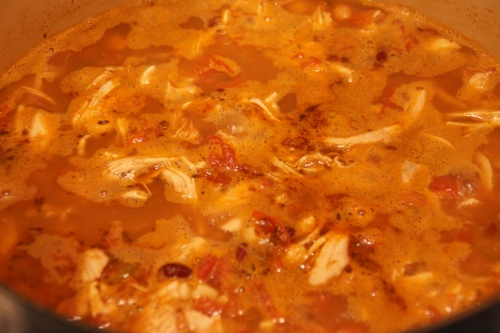 Slow simmer for 25 minutes to concentrate flavor and heat everything through. 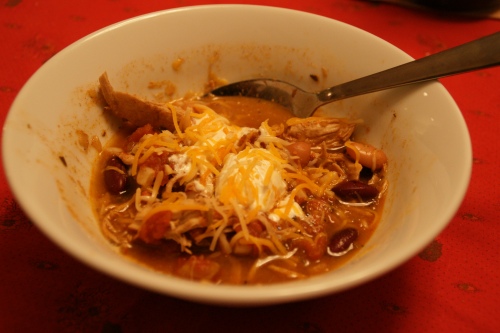 Yeah, it was good!

Next time I’ll probably add fresh chopped cilantro at the end just to give the soup a bit of freshness. If I didn’t use the Rotel tomatoes (I fear looking at the ingredient label), I’d use the three chili combination in the ATK white chicken chili, plus the lime and cilantro.