Prepping for the First Mommy Dinner of 2013!

When I initially sent out my email reminder to the mommies this month, several immediately responded that they couldn’t make it.  I was slightly distressed because my neighbor Penny, whom everyone has missed over the last few months, was coming.  I asked the group if the following week would be better, but it wasn’t.  I then wondered if we’d hit six people– my minimum for the dinner to proceed.

Over the last few days, the size of the group has almost doubled; we’re going to have a full table!  Partay!  I informed (there is no better way to put it) my husband Kurt that we would have to re-install the third leaf to the giant dining room table in order to seat a dozen.  Of course, I had just asked him a few weeks ago to pull the leaf out because “I never get all 12 ladies.”  Oh well, c’est la vie!

There is a sizable Indian community here in Northern Virginia; it’s fairly easy to get Indian ingredients, so I decided to attempt an evening of Indian fare.  The only Indian dish I regularly make is a chicken dish that I saw Nigella Lawson make on her show.  She calls it Mughlai Chicken and it’s made with yogurt and a paste of ground almonds.  It’s really quite good with a mild, rather than fiery heat, and my son Ken, who shudders every time we suggest going out for Indian, LOVES it.  (He swears it could not be an Indian dish because “it’s good”).

I decided to make samosas as an appetizer with a pineapple juice cocktail, followed by the Nigella chicken, rogan josh, my friend Jacki’s red lentil dahl and palak paneer.  I’ll serve basmati rice perfumed with spices and lots of homemade garlic naan.  I’m leaning towards a fruity Pinot Noir or Gewurtztraminer to balance the spice in these dishes.  (I haven’t bought the wine yet, so if you have any suggestions, please comment below)!  For dessert, we’ll have Indian rice pudding.

I found recipes online and although the mixing of pastes and spice blends is time-consuming, I can also make several dishes ahead of time; in fact, the bloggers and even Nigella recommend making them a day ahead to let the flavors meld and improve.  With so many dishes, that will work well for me; even with an open kitchen, I much prefer not having to monitor a dish while talking to my gal pals!  (I may even remember to take pictures as I cook for posting since I’m doing them ahead of time)!  If not, we’ll try to remember to take pictures at the dinner…

This evening I’m making Nigella’s Mughlai Chicken for dinner– just for some added practice on blending pastes and “sputtering” spices in hot oil.  I rarely veer from Nigella’s recipe which you can find here; she is a self-proclaimed lazy cook, so her techniques are never difficult!  The only change I’ve made is for my family: I don’t sprinkle the dish with sliced almonds at the end because Ken doesn’t like the texture.  Do use chicken thighs; the meat is more flavorful and moist.

Here’s how I made it:

First I tossed four fat teaspoons of almonds (I happened to have blanched ones, but I usually use regular ones) into the processor 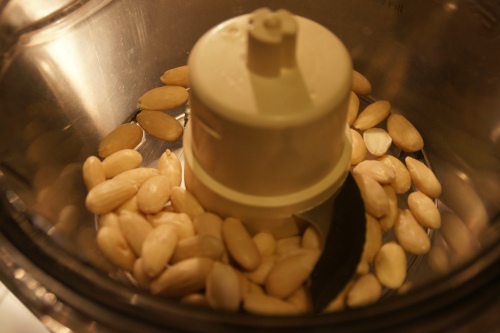 You don’t have to buy blanched almonds; mine were leftover from a botched experiment with torrone…

and pulsed until they were ground: 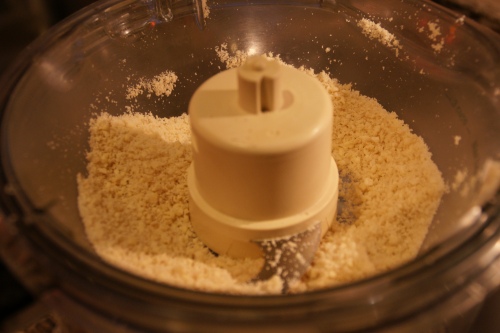 Faster than a mortar and pestle!

I removed the almonds to a small bowl, then added the ginger, garlic and spices to the work bowl, 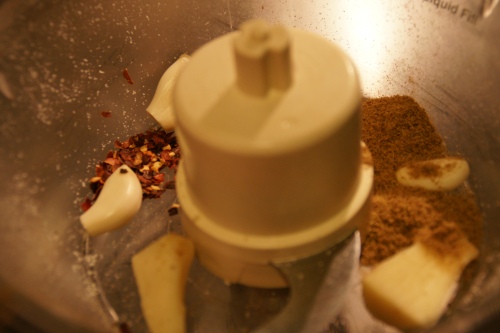 Note:  How to Peel Ginger

Don’t use a paring knife; that’s too cumbersome.  Instead, use the edge of a teaspoon to scrape the thin peel off.  Fast and easy! 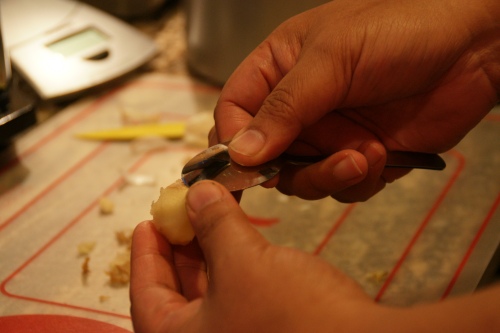 Did you know I can now take hands-free photos – NOT! (Ken took this shot)

and pulsed until I had a paste, of sorts: 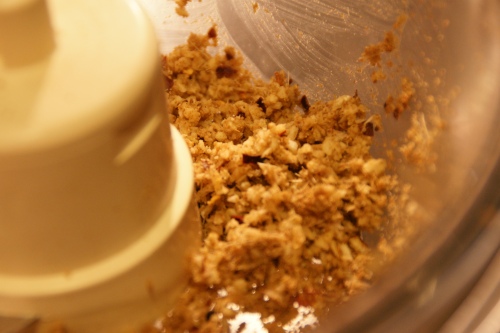 Make sure any chunks of ginger have been chopped.

I add the almonds and water and pulsed to combine; you should end up with a more liquid version of the first spice paste: 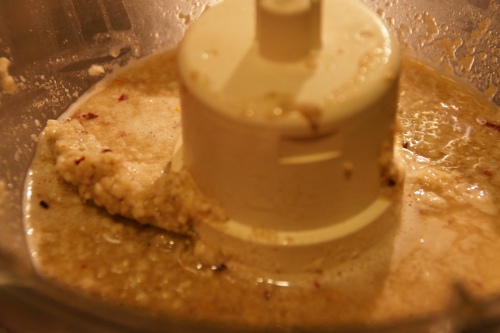 Looks gross, but will taste fantastic!

I heated the oil in a large pan, then added the chicken thighs (I only cooked half the amount), letting them brown on all sides and removed them  to a pie plate, 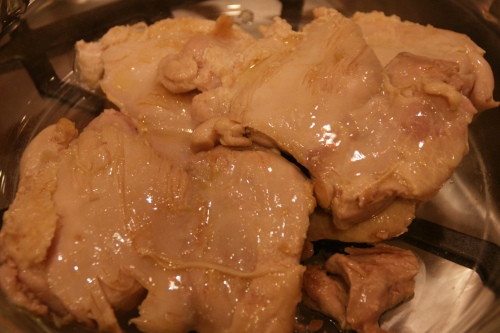 then added the dry spices (cardomom pods, cinnamon stick, bay leaves and cloves) and let them sputter a bit in the oil. 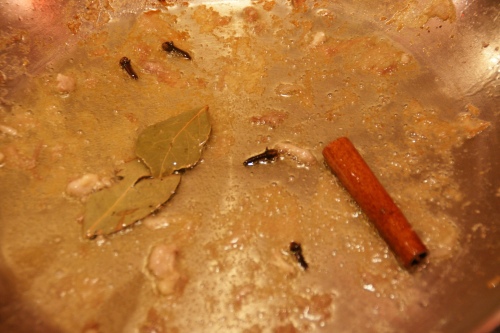 The sputtering begins…watch out, things may actually pop!

I lowered the heat and added the onions, cooking them until they were tender and golden. 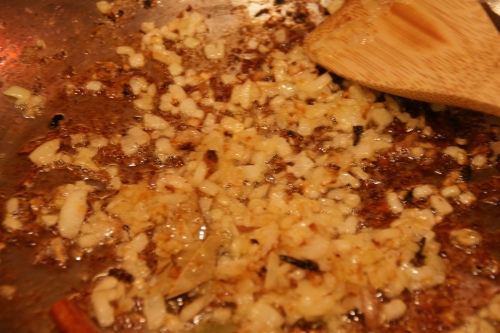 Next I added the almond-spice paste, stirring to let it cook a little. 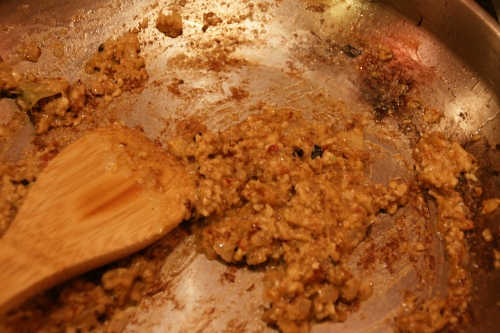 This is the pan after most of the water has evaporated from the almond paste and it’s beginning to brown.

Then I  added the yogurt, continually stirring, 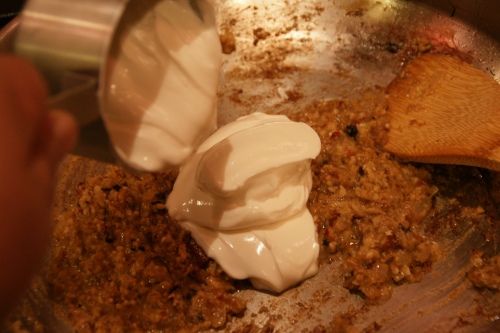 Pour and STIR; you’ll be starting to deglaze the fond…

followed by the remaining wet stuff (stock and cream) and the golden raisins. 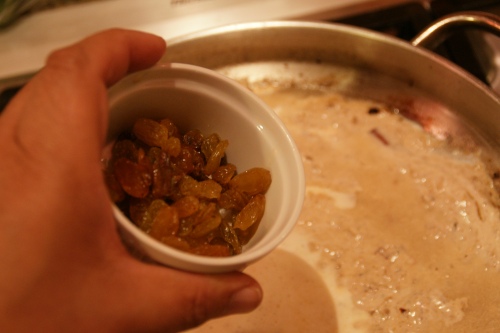 Sun Maid has these, but you can get them in an Indian food store as well.

I added back the chicken and any juices, 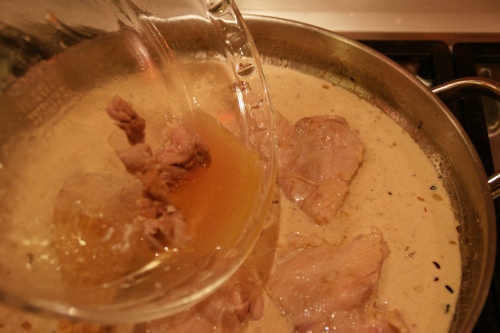 Yes, the juices will be pink, but that’s ok.

then the seasonings (salt, sugar, garam masala).  I stirred the sauce and  turned the chicken pieces to coat.  I brought the sauce to a simmer, then covered and let the chicken cook for 20 – 25 minutes or until the thighs are cooked. 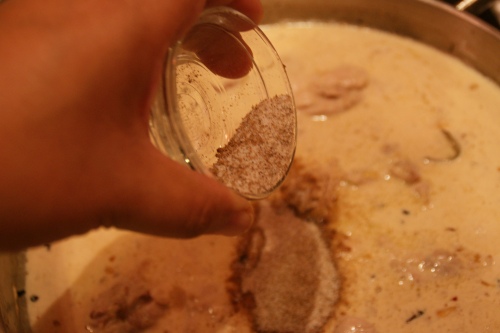 The third layering of seasoning

No sliced almonds for us, and I served it with, what else?  Basmati rice. 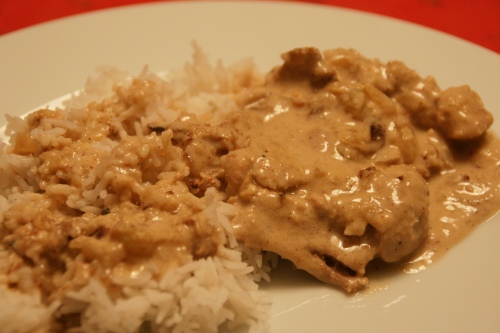 Yes, I poured the sauce right over the rice, too!

Kurt mentioned that he thought the sauce wasn’t as sweet as in the past.  I also noticed that there was something missing.  Did any of you notice what was missing above?  The cardomom pods!  They add a sweetness to the dish that Kurt mistook for sugar.  So don’t forget to add them!

5 responses to “Prepping for the First Mommy Dinner of 2013!”