The area forecast warns of heavy snowfall for Wednesday; I’m debating whether or not to stock up for the potential Snowmegeddon or just wing it since the last few forecasts have been terribly incorrect.  Whether or not I make that last minute grocery run (I bet the shelves will be empty by Tuesday afternoon), I’m worried about losing power.  Even with underground lines, our area tends to lose power when the weather turns ugly, so I’ve decided to defrost some frozen meals.

Tonight we’re having leftover pot roast, and to jazz it up a bit, I’m making popovers.  Popovers are the sleeper hit in my family; I made them one Christmas and now they are on the “must-have” list.  I actually have two popover pans because folks always want more than one!  I think part of their appeal is that most people associate popovers with old-time fancy steakhouse meals– a special occasion bread!

They’re an interesting bread– no leavening, just eggs, milk and flour, but the lift comes from the fact that the batter is poured into a special baking tin with tapered cups.  Fat is heated in each cup so that when the batter is poured, it sizzles and creates the steam for the puff.  You can use a muffin pan, but they won’t rise or puff as much.

These breads puff up beautifully and are crisp on the outside and almost hollow with the slightest bit of eggy bread clinging along the inside walls.  They are irresistible with their unique texture– perfect for sopping up roast beef au jus or bits of pot roast!  (If you use bacon lard as I do for the molds, they have a delicious bacon flavor as well)!

The recipe I use is, yet again, from my favorite Christmas cookbook, Christmas 101.  Make sure all ingredients are at room temperature and that you let the fat heat in the baking tin for at least 5 minutes.  You can add dried herbs if you wish, but I make mine plain.

One of the easiest batters ever!

Preheat the oven to 400 degrees.  Place a tsp of fat in each popover mold.  When oven is ready, it’s time to mix the batter.  Place the popover pan into the oven to heat the fat while you prepare the batter.

Yes, that is LARD

In a mixing bowl, whisk together the flour, salt and pepper. 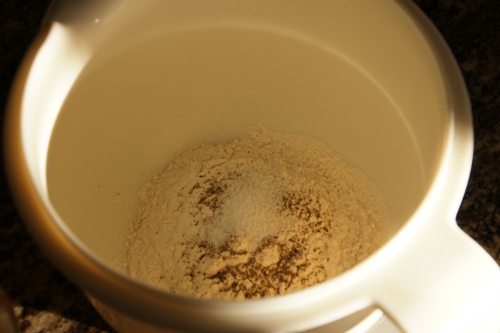 The dry stuff– if you’re feeling fancy, add some dried thyme and rosemary!

Place the eggs in a second bowl and beat well. 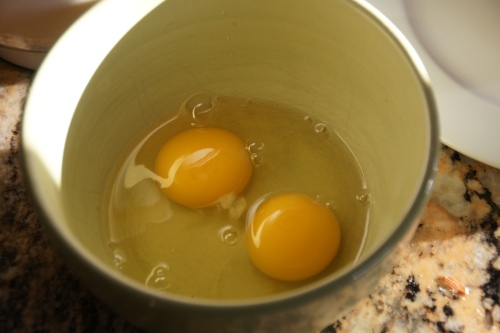 Remember I didn’t make a full recipe here, so only two eggs…

Whisk the milk into the eggs.

Make sure the eggs and milk are blended well

Pour the milk mixture into the flour mixture and whisk together til smooth.

No need to beat the liquid in gradually, just dump it all in and whisk away!

By now the fat should be heated; my bacon lard was completely melted.  Open the oven and quickly fill each mold at least 2/3 full, more for bigger popovers (mine were filled almost to the top).   There will be some initial sizzling, but don’t worry about that– it’s a good sign that the fat is hot enough! 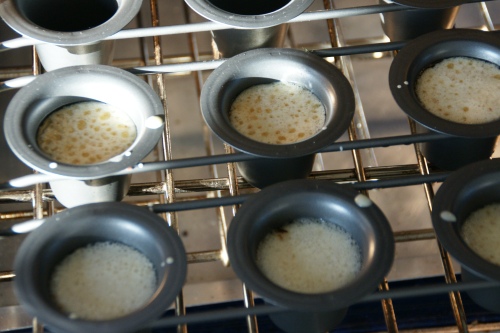 These will be VERY over-sized!

Bake for 30 minutes until popovers are brown and crisp.  (Don’t open the oven for at least 25 minutes so they don’t deflate).  If the popovers are browning too quickly, you can cover them with a sheet of foil.

What a transformation of flour, milk and eggs!

You’ll want more than one…

One response to “Pot Roast and Popovers”