I spent the first years of elementary school enrolled in a French school.  Why, I have no idea because my family is not Vietnamese (although many strangers would ask me and my sister if we were when they heard us conversing in French); we’re Filipino with a native language that is studded with Spanish thanks to the conquistadors.

Consequently, I knew vacherin as is a cheese (vache, meaning cow).  It wasn’t until I was 14 and living with a French family on the Riviera (their summer home– long story about how I ended up down south while the rest of my group was outside of Paris) that I learned vacherin is also a dessert.  My French family was attending a wedding, bringing me along as “l’americaine,”

The wedding cake was a multi-tiered vacherin– strawberry and vanilla ice cream sandwiched between three crisp meringue layers covered with whipped cream and a healthy dose of sliced strawberries and toasted sliced almonds.  Ooh la la!  I had never had anything like that, and thought it was a grand, fancy dessert that took the pastry chefs hours to make.

I was so wrong.  I made one recently for one of the mommy dinners; I sandwiched a layer of vanilla ice cream and raspberry sorbet between two meringues and covered the entire confection with whipped cream.  It was just as fabulous for them as it was for me at 14.

This evening, I made a different, mini-version.  Remember those chocolate chip meringues?  I got lazy and simply spread the last of the meringue onto the parchment paper, forming a square (probably 9×9, but it was free form).  I checked to see what ice cream we had in the freezer and returned with some kind of chocolate fudge nut brownie concoction (clearly for Ken and Kurt); with the chocolate chip meringue, this would be over-the-top chocolate.  I figured the whipped cream would dilute some of that sweetness…

Here’s how I assembled it:

With a serrated knife, first lightly score the meringue into two pieces, then cut the meringue in half.  Don’t worry if the meringue breaks– the ice cream holds everything together and the whipped cream hides all flaws!

Some folks trim the edges, etc., but I just go with whatever I’ve got

Let the ice cream soften a bit on the counter until it is pliable.  If you’re adventurous, you could even try a second flavor.  Spread one meringue with the ice cream, creating as thick or thin a layer as you want (I go for about 1 inch per ice cream).

Ice cream should be pliable, but not yet dripping

Place the second meringue on top of the ice cream and press gently.

Don’t press too hard (especially if you’re working with an already cracked piece as I was)!

Wrap the cake in wax paper and freeze until firm. 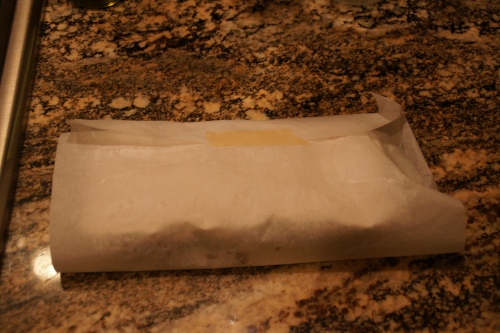 You can also use plastic wrap, but I think the paper is easier to handle

When the ice cream has hardened, whip the cream with the sugar, then frost the entire cake.

A baby vacherin! And yes, the whipped cream hides ALL FLAWS 🙂

Slice with a serrated knife and serve!

The texture is fabulous– crunchy meringue and tiny chips contrast with the whipped topping and ice cream! YUM.

You can use the mini-chocolate chip meringue recipe with or without the chips to pipe (or spread) two 9-inch disks, approximately 1 inch thick.  Bake as usual until meringue is thoroughly dry (again, not on a humid day).  Buy two pints of ice cream (my faves are vanilla and raspberry sorbet) and some heavy whipping cream.  Decorate with toasted slice almonds, cocoa powder, chocolate shavings, berries…whatever you fancy– and you’ll have a beautiful dinner party dessert!

3 responses to “The Other Vacherin”