I posted a picture of this slaw on FB the other day; I had spent the morning cooking two of my guys’ fave dishes.  For Ken, a big pan of fried rice with Chinese sausage and veggies that he can have for breakfast during the week.  For Kurt, it was this batch of broccoli slaw– with grated carrot, red onion, cheddar and bacon, slathered in a sweet and tangy dressing.

My friends on FB asked for the recipe, but I don’t have one written out.  It’s one of those dishes inspired by someone else’s food– this time a fantastic broccoli slaw that my sister gave me from the Amish market near her home in Maryland. So I posted the ingredients and my guesstimates, and then, the expected occurred.

We finished the slaw (almost 2 quarts) in 2 days.  Poof!  I reposted that we were out of slaw and I’d make more, with a focus on measuring everything.  The following recipe is that attempt. The good thing about this dish is that it is truly forgiving– Not enough dressing? Make a little more!– and you can tailor the dressing to exactly how your family likes it.

You can eat this slaw immediately, but I like to let it rest in the refrigerator so the vegetables can absorb the dressing.  Feel free to play around with ingredients and seasonings as you wish; the dressing is a basic cole slaw dressing, but I use some yogurt to intensify the tanginess because that’s what my husband likes!

Prepare the broccoli.  I cut off some of the stem so the pieces will not be too big; slice the stalks and florets thinly, about 1/4 inch.

Cutting off part of the stem 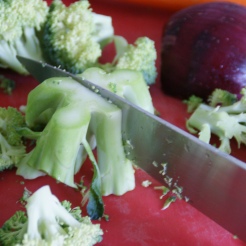 Slicing the stem so the pieces won’t be too big.

The total sliced broccoli filled the top of my largest (8 cup) measuring cup.  It felt like it was more than I made the other day. 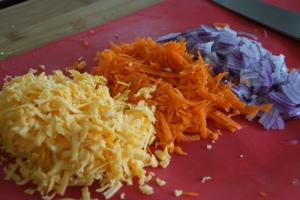 Fry the sliced bacon until crisp, drain and set aside. 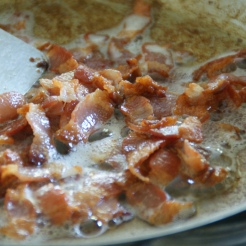 Crispy and ready to drain.

While the bacon cools, it’s time to make the dressing; this was the most time-consuming part because I normally plop, whisk and taste, but this time I measured!  Mayo (I use Hellman’s olive oil) and yogurt (this time I used Kurt’s homemade– he’s in a Middle Eastern culinary mode right now), followed by sugar, apple cider vinegar, and salt and pepper:

Mayo and yogurt. You can adjust the relative amounts based on how much tanginess you want. 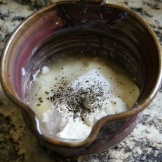 All pantry ingredients. Whisk away and TASTE!

Please taste after blending and adjust.  The dressing needs to be fairly intense because it will be absorbed by a lot of vegetables.

The dressing is fairly thin.

Serve as is or let chill.  I did both:

Chilling for when Kurt gets home!

Filed under Food, Friends, side dish